Another State Has Welcomed Cops Who Said NO To Vax Mandates!

What Happened To This Unhinged Lib Papa Johns Driver Who Threatened A Trump Supporter Is Pure Karma!

KATHY GRIFFIN Danced Topless And What People Said In Response Is HILARIOUS! [VIDEO]

Sleepy Joe Just Forgot How Long He Was A Senator! [VIDEO]

What Ron DeSantis Did For Persecuted Patriot Police Proves He Needs To Be President!

A forest ranger on duty discovered a mysterious cabin in the deep forest of Arcata, California.

Mark Andre was marking trees in one of the Arcata Community Forest’s most remote sections to be harvested for the first time on 30 years recently when he happened upon something that wasn’t there the last time he’d been in the area. That was back in 1985, when Arcata’s Environmental Services director was a city forest technician.

Andre, now an Environmental Services director in Arcata, California, was marking trees in the forest when he looked up and saw something out of place. “I didn’t see it until I was 12 feet from it,” he said. “It’s in the perfect out-of-the-way spot where it wouldn’t be detected.”

It was a cabin. And not the usual ramshackle, trash-strewn heap of debris, but a proper house, constructed, if not for the ages, for more than just a brief stay. 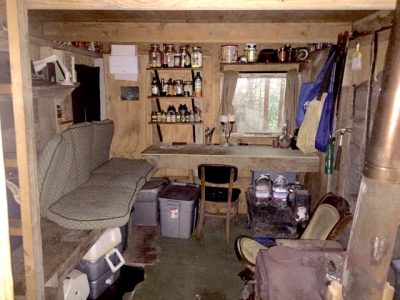 The sturdy shack, measuring perhaps eight by 12 feet and 15 or so feet high, features a concrete block foundation, stout frame, peaked roof, small porch with wooden awning, multiple windows and walls of plywood covered on the outside with brown tarps, black plastic sheeting and lots of concealing forest duff.

No trails lead to the small home, and the faintest of footpaths in the immediate area trail off to none of the environmental abuse normally associated with forest campsites – no trash piles, no discarded clothing, no open-air latrine strewn with toilet paper; nothing to show anything but scrupulous regard for the natural surroundings.

Since it is illegal to camp or build on public property, Mark called in a little help and decided to enter the premises. When they were inside, what they found would only add to the mystery.

Other things inside consisted of canned foods and even a “things to get” list that dated the first thing crossed off the list back in 2011, indicating the cabin had probably been there since at least then. Although those searching the premises still couldn’t figure out who the cabin belonged to, Mark posted an eviction notice on the front door along with his contact information, but this is where things get even weirder.

Less than two weeks later, they came back to find that the cabin was gone. Although there were a few of the larger things, such as the wood stove and some other furnishings, it was mostly gone. As it turns out, the owner had found the eviction notice and had started moving out. Just as before, there were no trails left behind to show which way they headed. Once again, even the access routes to the site showed virtually no wear and no one reported seeing anyone hauling heavy items down the trails.

“That’s the cleanest camp cleanup I’ve ever seen,” said Michael McDowall, the natural resources technician for Arcata’s Environmental Services department. “There wasn’t a nail, not even a gum wrapper left behind.”

The only thing left behind by the resident was a symbol made of charcoal that is reportedly a symbol to represent squatters.

“I’m not finding it strange at all some people just want to live off the grid the person wasn’t bothering no one and was taking care of the area,” one reader commented on Facebook in response to the story.

“Probably a tunnel or cave nearby. The symbol left behind probably indicates a directional signal for others as to where the person moved to,” another wrote.