Day after day, people all across the nation observe panhandlers on street corners, telling people they are homeless. Things are not always what they are portrayed or seem to be, however.

A San Diego woman said she witnessed a pregnant woman begging for money at a shopping center before leaving in a Mercedes Benz.

According to IJ REview, Melissa Smith said she had seen the woman standing with a little boy and holding a cardboard sign while asking passersby for money every weekend. Melissa said she noticed the woman and boy get into a car with a man, and that car was reportedly a luxury Mercedes sedan.

“She sits there with the sign. He goes and parks the Mercedes. And they put up the sign and not less than five minutes, here she is getting money from all these people,” Melissa said, reports WGN-TV.

“Lo and [behold] they were in front of us,” said Melissa. “Here they are counting money, laughing and their little boy is not in a car seat or seat belt. He’s all the way in the front seat with them.”

“I’m going to take these photos so I can show my friends so they don’t give them their money. They don’t need it. They are driving a Benz,” said Melissa. The woman allegedly became aggressive after she saw her taking photographs. “Next thing I know, she picked up this big boulder,” said Melissa. “I don’t know if pregnant people can do that. She puts it over her head and starts coming at me with this rock.”

A witness reportedly called 911, but the panhandling couple had left before police arrived. Authorities reportedly tracked the car’s license plate, linking it back to an apartment in San Diego. The family living in the apartment had reportedly moved out without leaving a forwarding address.

Daily Mail reports the car appeared to be an older model of Mercedes C320, which can sell new for around $30,000. 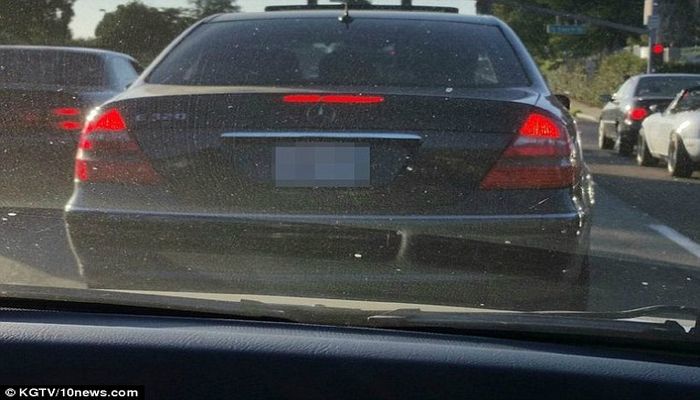 Reporter Emily Valdez from NY Daily News later encountered the couple, and asked them about the car. Valdez reportedly asked the man in Spanish where the Mercedes was now. He is said to have answered, “What Mercedes?” in Spanish.

The woman, who this time also held a baby in addition to having the little boy with her, was likely the same woman who had been photographed before, according to a facial recognition expert. After the reporter questioned the couple, they reportedly drove away in a minivan.