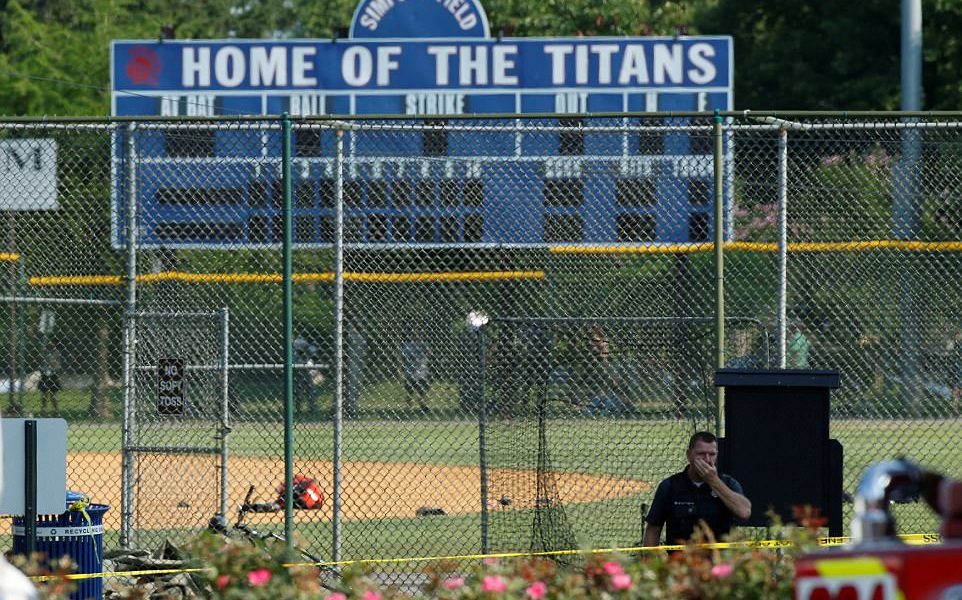 A video of this morning’s shooting spree inspired by democratic pundits and politicians.  The video is a little over 5 minutes long.  Meanwhile, Steve Scalise’s condition has been downgraded to critical after his surgery.  Since Donald Trump has been president, the level of violence from the left has been incredible from BLM to Antifa to the followers of Rachel Maddow.  I’m not saying she inspired violence, just that her lies on what is happening deludes people to the truth.

The chilling video was captured by a witness at Eugene Simpson Stadium Park in Alexandria, Virginia on Wednesday morning.
Multiple gunshots can be heard ringing out as the Republican lawmakers and aides try to take cover.

At one point, the footage shows a wounded player lying helplessly in the middle of the field as the gunman continues to fire dozens of shots. It is not clear if the player is Scalise who was shot in the hip and is in a critical condition in hospital.

Further details on the whip’s injuries were revealed by Ohio congressman Brad Wenstrup, who was one of the first people who tended to Scalise in the immediate aftermath of the shooting.

The Ohio Republican applied pressure to the 51-year-old’s wound, and told CNN he was concerned he had been unable to find an exit wound.

The news network also reported Wednesday afternoon that Scalise’s wife, Jennifer, and their two young children are traveling up from New Orleans to Washington DC to be with him.

It is not yet known if the whip will require a second surgery.

In the dramatic video of the shooting, a man recording the footage can be heard shouting, ‘Do we know where he’s at?’ as he cowered behind a trash can with his dog.

Someone responds that the gunman is ‘behind home plate’, before the man adds: ‘I assume people have been calling 911 already?’
He later asks: ‘Is that guy OK out there. The guy whose been shot, is he OK?’

Towards the end of the six-minute video several guns are fired simultaneously as people shout in the background to ‘stay down’.