There have long been two theories on what happened to Amelia Earhart that led to her disappearance.  One theory is her plane went down forty miles shy of Howland Island and drowned.  The second theory is that she was captured by the Japanese in 1937.  A picture that has been discovered seems to suggest the latter.  You can see in the picture that she is watching as her plane is being towed by a large boat.  Her co pilot appears in the same picture.  It is believed that she died in 1939 of an unspecified ailment.

That theory is now being put to the test however as a result of this never-before-seen image that appears to show both Earhart and Noonan in the Marshall Islands, with a note on the image placing them at the Jaluit Atoll.

Earhart’s plane can also be seen on the far right being dragged by a large ship.

The image is believed to have been taken in 1937, the same year that Earhart went missing in the vicinity of the island chain.

It is a bittersweet discovery however, as the photograph also confirms the long-held belief that Earhart was captured by the Japanese and held as a prisoner of war, this according to experts who will appear on the History special ‘Amelia Earhart: The Lost Evidence,’ airing this Sunday.

The Japanese government stated that they have no record of Earhart ever being a prisoner. 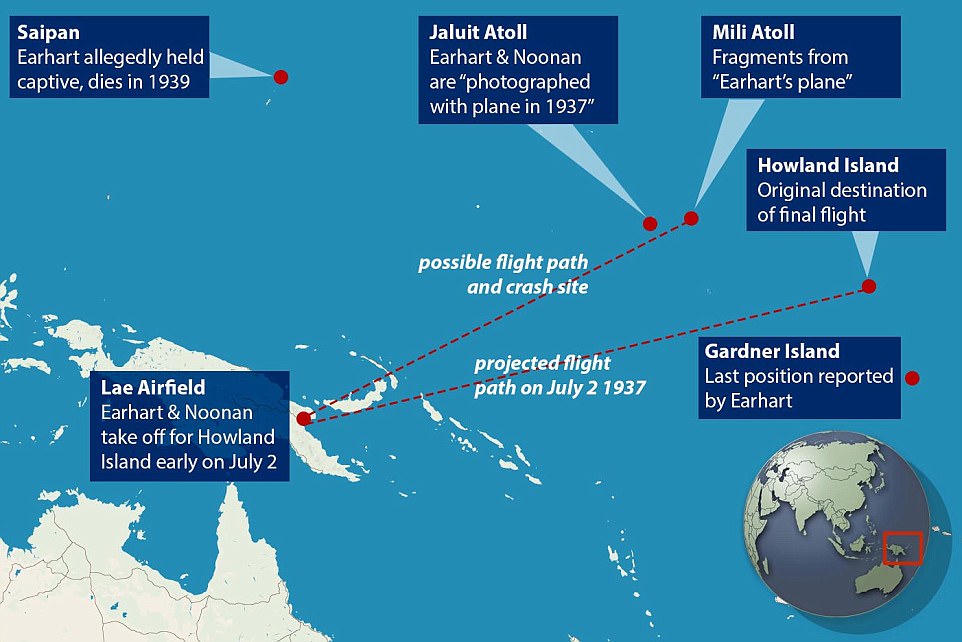 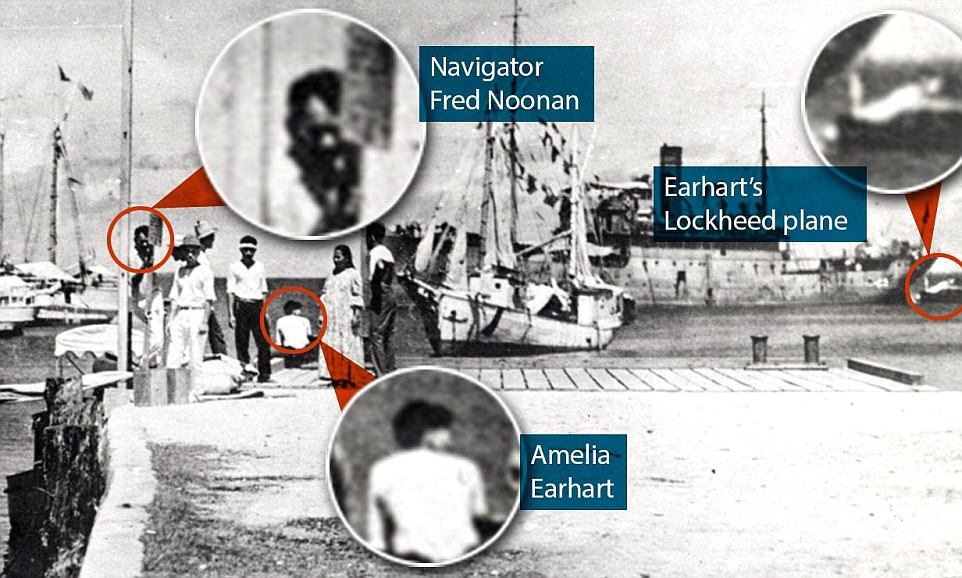 In the image, Earhart has her back to the camera and is seen speaking to Noonan as they prepare to board a boat.

The faces of the two cannot be seen, but their profiles do bear a striking similarity to the pair, who were close to finishing out their goal of circumnavigating the globe.

It is believed that the photographer was a US spy or emissary operating behind enemy lines in the Pacific.

He was later executed for committing treason according to reports.

A facial recognition expert said that it is likely Earhart and Noonan in the photo, which was discovered in the National Archive by retired federal agent Les Kinney.

The authenticity of the photograph has also been confirmed by experts.

What remains unclear however is how Earhart would have been able to crash land the plane and then get from her destination to the Jaluit Atoll, which is 1021 miles away from  Howland Island.

That problem is solved however by a number of locals who claimed to have seen Earhart’s plane when it crashed off the island nation.

She would have quickly been taken captive at that point along with Noonan, as Japan had begun to prohibit Westerners from entering their territories by that time.

It has been a theory of many over the years that Earhart died on Saipan in the Northern Mariana Islands while being held by the Japanese.

Theory One: Amelia Earhart and Fred Noonan crash into the Pacific a few miles short of their intended destination due to visibility and gas problems, and die instantly.

Theory Two: Earhart and Noonan crash land on the island of Nikumaroro, where they later die at the hands of coconut crabs, which hunt for food at night and grow up to three-feet long. The name comes from their ability to opened the hardened shells of coconuts.

Theory Three: Earhart and Noonan veer drastically off course and crash land near the Mili Atoll in the Marshall Islands. They are rescued but soon taken as prisoners of war by the Japanese and sent to a camp in Saipan. Noonan is beheaded and Earhart dies in 1939 from malaria or dysentery.

Theory Four: Earhart and Noonan make it to Howland Island as planed and are eaten by cannibals.

Theory Five:   Earhart was an American spy sent to gather information on the Japanese ahead of World War II.

The cause of death is believed to have been Malaria or dysentery, which claimed the American icon’s life in 1939, just two years after she went missing over the Pacific.

A lengthy file that allegedly described her actions in the Marshall Islands was also on file at the Office of Naval Investigations for years, until the close to 200-page report suddenly went missing – just like its subject matter.