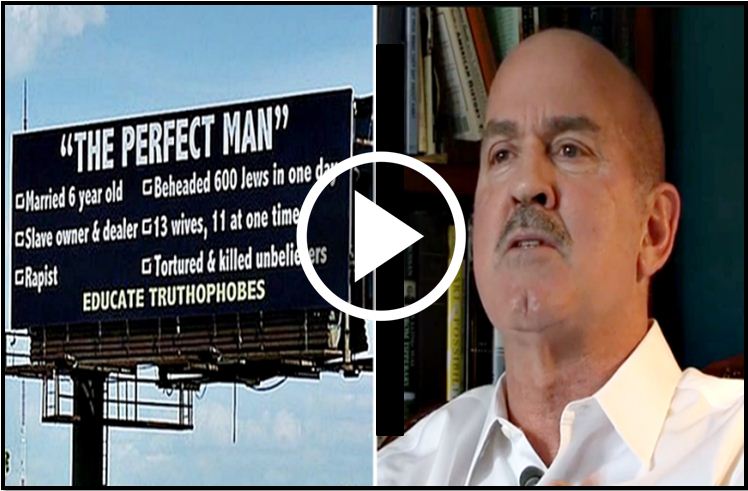 A billboard on the east side of Indianapolis near the Washington Street exit is catching the eyes of drivers, along with the ire of local Muslim groups.

Just days ago, leftists and Muslim groups across the U.S. loudly condemned a billboard in Indianapolis, Indiana. The sign contains a simple message, which reads, “The Perfect Man,” with check-marked bullet points including “Rapist,” “13 wives, 11 at one time,” and “Tortured & killed unbelievers.” Instantly, Muslims knew the billboard was calling out their prophet Muhammad, prompting them to demand the sign’s removal in accordance with Sharia blasphemy laws.

This national outcry has already prompted the sign’s owner to relinquish his personal safety by coming forward to not only take credit for the billboard’s construction but issue yet another daring message to “truthophobes” who deny its credibility.

WTHR reports that Don Woodsmall, who is a Duke law school graduate, has proudly taken responsibility for the billboard but says that while he is unafraid to show his face to the dangerous Muslim community, he’ll protect his clients’ identities. Woodsmall came forward to local media to slam free speech objectors, condently declaring that he would gladly remove the sign himself — all they have to do is prove the statement wrong.

In his statement, Woodsmall says, “It is interesting to note… the Muslim community knew exactly who it was referring to. The truth is a powerful weapon.”

Woodsmall explained that he only agreed to erect the sign after thoroughly researching each claim and nding proof directly in the passages of the Quran and hadith. In addition, he spoke to at least half a dozen Islamic scholars who conrmed the scriptures in question.

“I was convinced that each point listed on the billboard was historically and factually true. I would encourage others to do their own research to verify the veracity of each and every point,” Woodsmall wrote. He also noted that he would remove the billboards if the statements are proven to be false.

Despite Muslims demanding that Woodsmall names his clients, undoubtedly for nefarious purposes, the billboard owner refuses to endanger their lives. The unwavering owner slammed the sign’s critics, reminding them that it is the very denition of free speech to question and tear apart lies and toxic ideologies.

“My clients want this national conversation to happen if we are ever to overcome the violence that plagues Islam,” he wrote to 13 Investigates. “This is not only pro-American, but benecial to Muslims who came to America to escape the Sharia.”

Disturbingly, designated terrorist group CAIR and lying Muslims are declaring the message “racist” and “Islamophobic,” although none can provide any scripture or historical text to back up their claims. On the other hand, each one of the bullet points has a direct correlation to the Quran and hadith.

If the Muslim critics were honest, they’d point out that the only aw in Woodsmall’s message is that Muhammad didn’t necessarily behead 600 Jews in one day — historical records suggest it a number between 500 and 900 Jews and likely over a period of several days. Potato, potato.

If the left considers it “hate speech” to summarize these violent and bigoted Islamic passages, it’s time for them to admit that the Quran and hadith are hate speech. It’s not racist to denounce Muhammad’s ownership of dozens of black slaves as racist. In fact, it’s racist of Muslims and leftist to defend Muhammad’s slave ownership and attempt to censor it.

The truth is that the prophet Muhammad boasted of his own racist slave ownership, sex slavery, marriage to a child, and mass slaughter of unbelieving men, women, and children. These are not fear-mongering allegations but direct quotations from the prophet, his closest companions, and even his favorite child bride, Aisha.

It is inexcusable for Muslims to demand we shut up or apologize for pointing out the sadistic behavior of their prophet. Instead, they are the ones who should be apologizing for calling a slave-owning, murdering, pedophile rapist the “perfect man” and denounce his actions immediately.