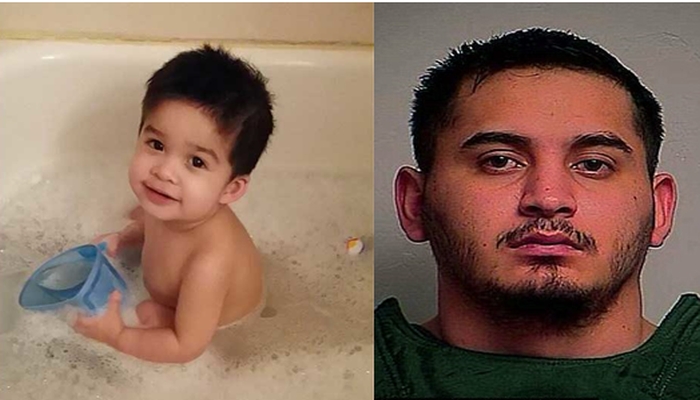 Unsealed court documents from the trial of a man accused of killing an 18-month-old boy reveal the disturbing level of violence involved in the death.

Jesus Adan Castillo, 22, of Blackfoot, Idaho, is on trial charged with first-degree murder in the death of his girlfriend’s son, 18-month-old Zachary Tendoy, in March. The court documents, detailed by the East Idaho News, stated that the Bingham County Sheriff’s Office received a 911 call on March 23 at 4.00am, saying that Tendoy had fallen out of his crib and wasn’t breathing.

When cops and paramedics arrived at the home where Castillo lived, they found Tendoy unresponsive, his skin already turning blueish-grey. The toddler was limp and laying on the floor, with vomit on his chest and his eyes fully dilated. Both Castillo and his girlfriend, Tendoy’s mother – whose identity has not been revealed – were in the home at the time.

Castillo allegedly told police that while Tendoy’s mother was sleeping, he went to take a shower. While he was showering, he heard a loud thud and went to investigate.

Castillo claimed that Tendoy initially ‘acted dazed,’ but otherwise seemed to be okay. When his condition got worse, though, Castillo said he woke up his girlfriend and made the 911 call.

The toddler was taken to Bingham Memorial Hospital and given a CAT scan, at which time doctors discovered he had multiple skull fractures and brain swelling. They also found evidence of severe traumatic injuries including major blood vessel and valve tears, as well as retinal hemorrhaging.

According to the court document, ‘Doctor’s explained…to sustain these injuries in a child of similar size (they would have to have been) in an auto accident at 70 mph … and the tear in the stomach is equivalent to being secured in only a lap belt of the time of the accident.’

Overall, ‘The doctors described the attack as being very violent,’ the document said. Armed with this information, investigators brought Castillo in for an interview about what happened to Tendoy. The court document revealed that Castillo gave them a much more vivid description of the events leading up to the 911 call that night.

According to the document, Castillo told investigators that he and Tendoy’s mother had been drinking that evening, before and after they put Tendoy to bed at about 9.30pm. At some point, Tendoy’s mother went to sleep. Castillo continued to drink, before taking a showering and hearing a thud.

Castillo’s alleged description of what happened next veers away from what he told cops and paramedics that night.

It was only during the interview with the investigators that Castillo revealed that after checking on Tendoy, he gave the boy a bottle because he was upset. When the bottle failed to settle Tendoy and he kept whining, Castillo allegedly said he used all his strength to push the toddler, resulting in Tendoy falling against a door jam. The child apparently continued ‘bothering’ Castillo, following him as he walked away.

At that point, the court document said that Castillo ‘heel kicked’ the boy in the stomach, causing Tendoy to hit a wall and door trim. He then put the child into his playpen. When Tendoy continued to cry, Castillo said he picked up the toddler and then hit him as hard as he could before repeatedly shaking him and then depositing him back into the playpen.

Castillo then left Tendoy alone, during which time the child crawled out of the playpen and fell on the floor, which is how Castillo found him later — on his back, unresponsive.

Cops arrested Castillo on March 24 and charged him with felony aggravated battery and felony injury to a child. But, when Tendoy was declared brain dead and died the next day, on March 25, prosecutors amended the charges to first-degree murder. Castillo is in Bingham County Jail and has a $1 million bond.

Although Idaho is a state in which capital punishment is legal, Bingham County Prosecutor Cleve Colson is not seeking the death penalty in Castillo’s case. If convicted of first-degree murder, he could face up to life in prison, with an added $50,000 fine.

Following Tendoy’s death, East Idaho News reported that his family agreed to donate his organs to eight children who needed them.