A mom gave birth to a healthy baby boy but soon she found out that there was a problem with her placenta.

Kristen Terlizzi and his husband Jeff from Los Gatos in California were expecting their second baby together.

At first, Terlizzi’s pregnancy went smoothly, but at the beginning of her third trimester things began to change. “Around 28 weeks in pregnancy, my ultrasound images started looking suspicious,” Terlizzi revealed in an interview with Stanford Health Care.

As the examination shows, doctors couldn’t find any separation between her placenta, her uterus and her bladder. Terlizzi was subsequently diagnosed with placenta percreta – a more severe form of placenta accreta – and the condition could have devastating consequences for her. 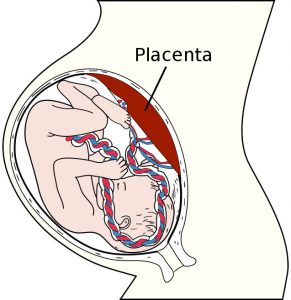 Normally, a few minutes after your baby is delivered, the placenta detaches from the wall of your uterus and is delivered as well. In placenta accreta sufferers, the placenta remains attached to the uterine wall, which can cause severe bleeding.

It is a rare pregnancy condition and one of the known persons who suffered this kind of condition is Kim Kardashian.

Given the seriousness of her condition, Terlizzi had to give birth at 33 weeks. So, in July 2014, a team of 30 medical professionals at Stanford Hospital helped deliver her second son, Leo. Thankfully, the little baby was perfectly healthy. However, doctors then made a horrifying discovery.

The medical experts already knew that Terlizzi’s case of accreta was an especially severe case called percreta. In these instances, the placenta grows right through the uterine wall and can invade nearby internal organs. But when doctors came to assess the Terlizzi’s placenta, the situation was far worse than they expected.

Terlizzi’s placenta had grown far beyond any comprehension. As surgeons examined the scale of the tissue’s expansion, they pondered how they were going to get it out. Then, in an unprecedented move, they decided to leave it inside her.

“They stopped and closed me up with the entire placenta untouched, still inside my body,” Terlizzi revealed. “They were worried I would get an infection, that I would started spontaneously hemorrhaging. But, there was also this thought that maybe the body would start to reabsorb the placenta.”

So, for all intents and purposes, Terlizzi was pretty much a medical experiment. “I felt like a time bomb waiting to explode,” she admitted. And to make matters worse, after three days, the mom still hadn’t met her precious little baby.

As a result, her doctors pulled some strings and arranged a special midnight visit. Looking back on the special meeting, Terlizzi admits it gave her a massive moral boost. “I had something that I needed to get better for and to get back to,” she explained.

But things got worse before they got better. After six weeks in the hospital, bruises began to appear all over Terlizzi’s body. The signs weren’t good, and a scan later revealed that she was, in fact, approaching serious liver failure.

It was then that surgeons decided to operate. So, in an epic eight-hour procedure they removed her placenta and some unnecessary organs and repaired the damage to other critical ones. During this time, Terlizzi needed 26 units of blood to stabilize her.

For a while, it was touch and go whether the mom-of-two would make it. Happily, however, she went on to make full recovery. Now, she’s forever thankful for the expert care those at Stanford Health Care gave her and her baby.

“You’d never even know that Leo was a ‘premy,’” the proud mom gushed. “He’s a feisty and determined one-year-old. And we’re pretty convinced that my mutant placenta gave him some X-Men powers.”

Thankfully, Terlizzi can continue with her life and enjoy every moment spent with her family. As a way of displaying her gratitude, she now volunteers at Stanford Hospital; because, thanks to her doctors expertize, she’ll now get to see her children grow up.