For millions of Americans, a trip to the doctor is a dreaded experience. Maybe it’s a fear of needles that holds them back. Or maybe they have anxiety about a potential diagnosis. But for the vast majority of us, it’s the scale that gives us pause — and in many cases, the prospect of getting weighed at the doctor is what ultimately prevents us from making an appointment in the first place.

Weigh-ins are a standard practice before you see your doctor, but if you’ve experienced an eating disorder or are self-conscious about your weight, jumping on a scale in the middle of a busy hallway is a tall order.

Believe it or not, many doctors are well aware of this issue, and some are even trying to offer creative solutions. “Don’t Weigh Me” cards are now a staple in many waiting rooms across the country — and they’re earning high praise from patients who wish they’d known about them sooner.

Though the cards may seem new, they’ve actually been around for several years.

According to Good Morning America, they were first created in 2016 by a woman named Ginny Jones, who founded the online resource More-Love.org. 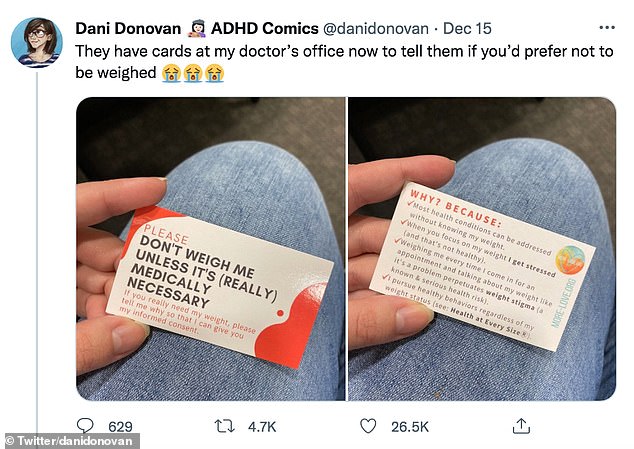 After struggling with an eating disorder for years, Jones wanted to create a virtual space that empowered parents to raise children “free from body hate and eating disorders.” Her hope was to help create a future where more kids feel at ease with their bodies and develop a strong sense of self-acceptance from an early age.

It was while she was working on the website that a new idea started to take shape. For years, Jones had been asking doctors and nurses not to weigh her during visits, which became a necessary tool in her recovery. 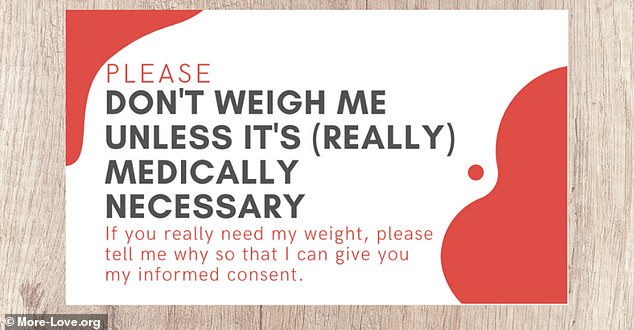 The front of the cards states: “Please don’t weigh me unless it’s (really) medically necessary. If you really need my weight, please tell me why so that I can give you my informed consent.”

The back of the cards states the bulleted reasons for the existence of the card: 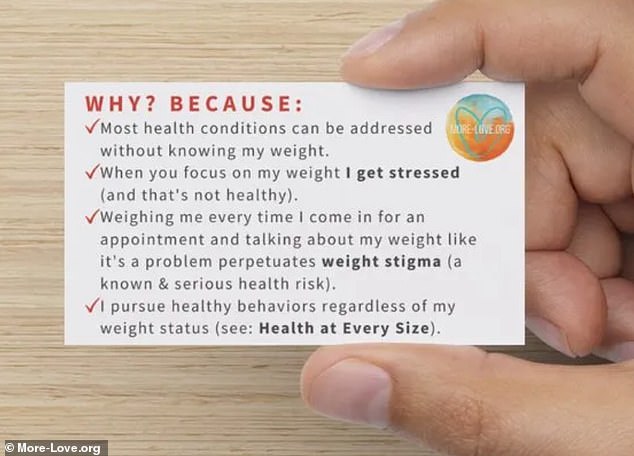 Not everyone thought these cards were a very good idea. That’s why online campaigner Alex Light, who operates an anti-diet culture blog, jumped at the chance to defend the “Don’t Weigh Me” cards and let people know that her view was in support of them.

“Being weighed at the doctors has been a source of concern for me ever since my eating and body image issues developed, which was before I was a teenager,” she wrote, adding: “‘A lot of the time, fat people go to the doctors, get weighed and the symptoms they are visiting the doctors for are immediately put down to weight. Because the medical system is weight and BMI-focused, and BMI is BS.”