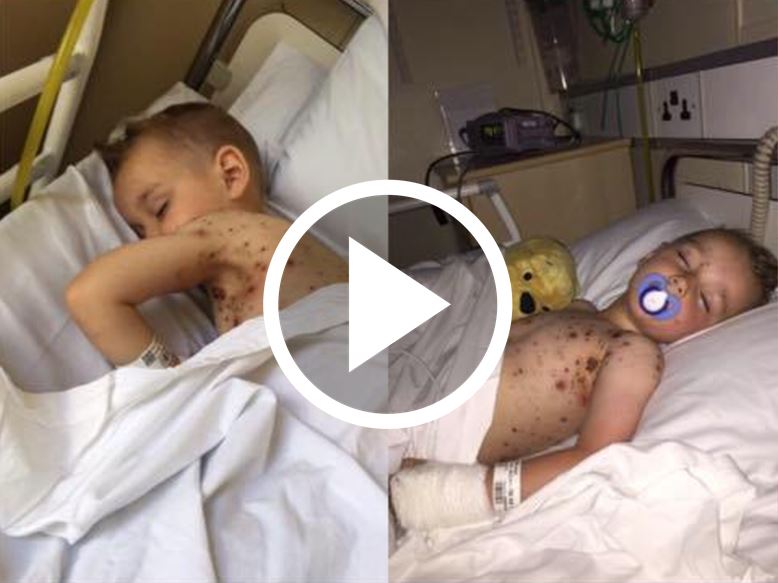 Chicken pox is just a harmless childhood disease. When little Lewis Lyons got chicken pox, he was prescribed ibuprofen – an over-the-counter painkiller, which reduces fever and inflammation.  The general practitioner diagnosed a regular strain of the disease and sent Lewis home with a mild kid’s variety of the painkiller.

But at home, Lewis’ condition rapidly deteriorated: his fever increased, the inflammation caused blisters, and he was in a lot of pain. For Hayley Lyons, the alarm bells started ringing, and she took her son immediately to hospital.

Lewis arrived at the children’s clinic not a moment too late. The doctors at the Alder Hey Children’s Hospital in Liverpool diagnosed a “sepsis” blood poisoning – triggered by the ibuprofen. Such a severe complication was new for the doctors treating Lewis.

Hayley’s instincts and quick reaction saved her son’s life because with blood poisoning, every minute counts. The caring mother posted a wake-up call on Facebook, which has been shared more than 430000 times: “Chicken pox is going around. Listen to me: Don’t give your children Nurofen / ibuprofen!”

Even the National Institute for Health and Care Excellence heeded Hayley’s advice and issued its own warning. Researchers at the institute note: The active ingredient of ibuprofen ensures that the pathogens can penetrate more deeply into the skin where they enter the bloodstream. Four different doctors prescribed Lewis this medication.

Thankfully Lewis is now on the mend. But Hayley sees it as her duty to spread awareness and educate parents worldwide about the serious contraindications of ibuprofen with chickenpox.

A spokesperson for Nurofen for Children said: “We are very sorry to hear about Lewis’s situation and we are pleased he has recovered. We take the health of our consumers very seriously and we are looking into Lewis’s case.

“The NHS advises paracetamol is the preferred painkiller for treating the associated symptoms of chickenpox. This is due to a very small risk of non-steroidal anti-inflammatory drugs (NSAIDs), such as ibuprofen, causing adverse skin reactions during chickenpox. However, reactions of this type are extremely rare.”