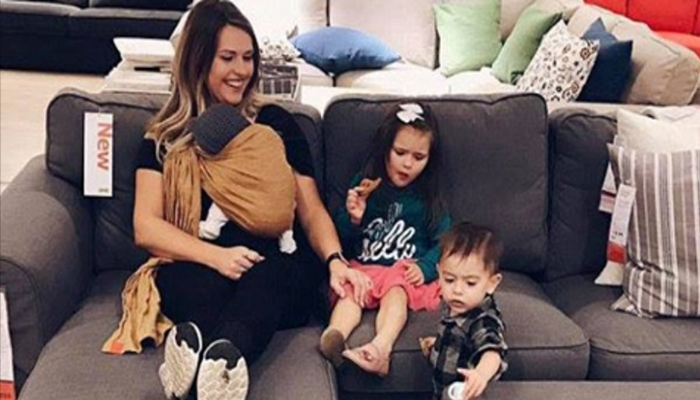 A California woman who says her children were targeted by human traffickers while shopping at IKEA is making waves on social media.

Diandra Toyos, a mother of three, shared her experience on Facebook on March 23rd.

Toyos, her mother and her three small children, aged 4, 1, and 7 weeks old, went to a San Diego-area IKEA to look at couches. While there, they became suspicious of a “well-dressed, middle-aged man” who was wandering around the store, looking at her children.

“At one point he came right up to me and the boys, and instinctively I put myself between he and my mobile son. I had a bad feeling,” she wrote. “He continued to circle the area, staring at the kids. He occasionally picked something up, pretending to look at it but looking right over at us instead.”

As Toyos moved into a different section of the store, the man allegedly followed them. That’s when Toyos and her mother noticed a second man. She described him as “dressed more casually and in his 20s” and wrote that he was loitering in the store like the other man was.

“We had a gut feeling something was going on, but we hoped we were wrong and they would move on,” she recalled. “So we sat in one of the little display rooms. For close to 30 minutes. And they sat too. They sat down on one of the couches on the display floor that faced us. That was when we knew our gut feeling was right and something was off.”

They eventually managed to lose the men and went to security to report the incident. Toyos believes the men were attempting to abduct her children, pointing out that they were neither shopping nor waiting for anyone.

“Something was off. We knew it in our gut,” she wrote. “I am almost sure that we were the targets of human trafficking. This is happening all over. Including the United States. It’s in our backyards. I’m reading more and more about these experiences and it’s terrifying. If not that, something else shady was obviously going on. Either way, as parents, we NEED to be aware.”

Toyos’ Facebook post quickly went viral. It was shared more than 100,000 times and got over 16,000 comments in a week, with some users accusing her of being paranoid. Others criticized her handling of the situation, saying she should have notified a store employee of the situation right away.

Toyos addressed her critics in a follow-up post in which she defended her interpretation of events. She also emphasized that it was not her intention to give IKEA bad press.

“Please don’t boycott IKEA,” she wrote. “The truth is, we need to be aware no matter where we are when we are with our kids. And unfortunately we can’t always assume the best of people. Live your life. Take your kids places. But be aware. And be attentive.”