Baby bump pics aren’t uncommon at all. With the rise of social media, expectant mothers are able to document their pregnancy for all of their friends and family near and far. But with the popularity of selfies, society has also become desensitized to these photos, and people are regularly being caught after forgetting to remove questionable material in the background of their snapshots…

A pregnant woman in North Carolina is behind bars after posting a photo on Facebook with drug paraphernalia subtly hidden in the background.

The woman from Cherokee, whose name is Natosha Kirkland on her Facebook page, uploaded the baby bump photo as her profile picture on February 16.

At first, there were only a couple of comments, including “Sexy” and “Love it. I wish you the best.” But it didn’t take long before others began noticing a stool in the background that had a spoon and syringe sitting on top of it.

After other Facebook users pointed out the drug paraphernalia in the photo, it became pretty clear why the 26-year-old mom-to-be also had what appears to be a tie-off on her arm.

According to several online records, Natasha (with an “a,” not an “o”) Kirkland was finally arrested on February 19 on a number of charges, including felony credit card fraud, driving with a revoked license, and felony obtaining property under false pretenses.

Shockingly, it does not look like she is facing any child endangerment charges, despite the disturbing Facebook photo.

According to the North Carolina court calendar, Kirkland is also facing a felony charge of larceny of a firearm.

Here is the photo which did Kirkland in… 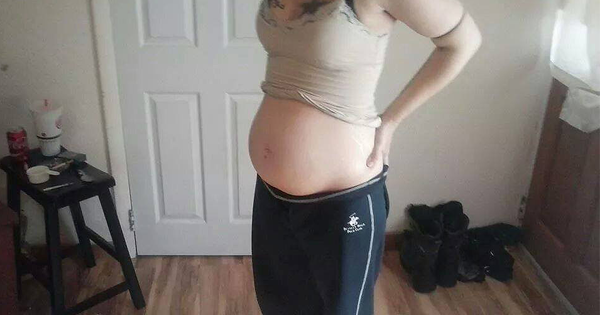 Unbelievable… This woman has no business being a parent! Share if you agree!