EWWW! Hospital Confesses It Had Been Giving Patients TOILET WATER To Drink!

Facebook Was Just Involved In A Racial Incident Where 1,300 People Were Dismissed!

World’s Hottest Weather Girl’ Has Unfortunate Wardrobe Malfunction Live On Air… Can You Tell What It Is?

These Thugs Held Up A Barbershop, Then They Realized Who Was In The Chair…

A Michigan man took to Facebook and proceeded to insult a Roseville police officer after he received a ticket for warming up his car in his own driveway.

“Every person warms up their car,” Nick Taylor said. “We live in Michigan!”

People in the community are furious about the citizen receiving a citation and the phones at the police department haven’t stopped ringing.

“I was furious when I saw it,” Taylor said.

Taylor said he started his car Tuesday morning to warm it up and went inside for 5 minutes. When he went back outside, he had received a ticket that said “motor vehicle unattended.”

“Vehicle parked in drive with keys in ignition, motor running — no one around,” the Roseville officer wrote on the ticket.

Taylor said the Roseville officer didn’t bother to knock on the door to inform him of the problem.

“That would have been respectful,” Taylor said. “I had no clue that this was a law, an ordinance.” 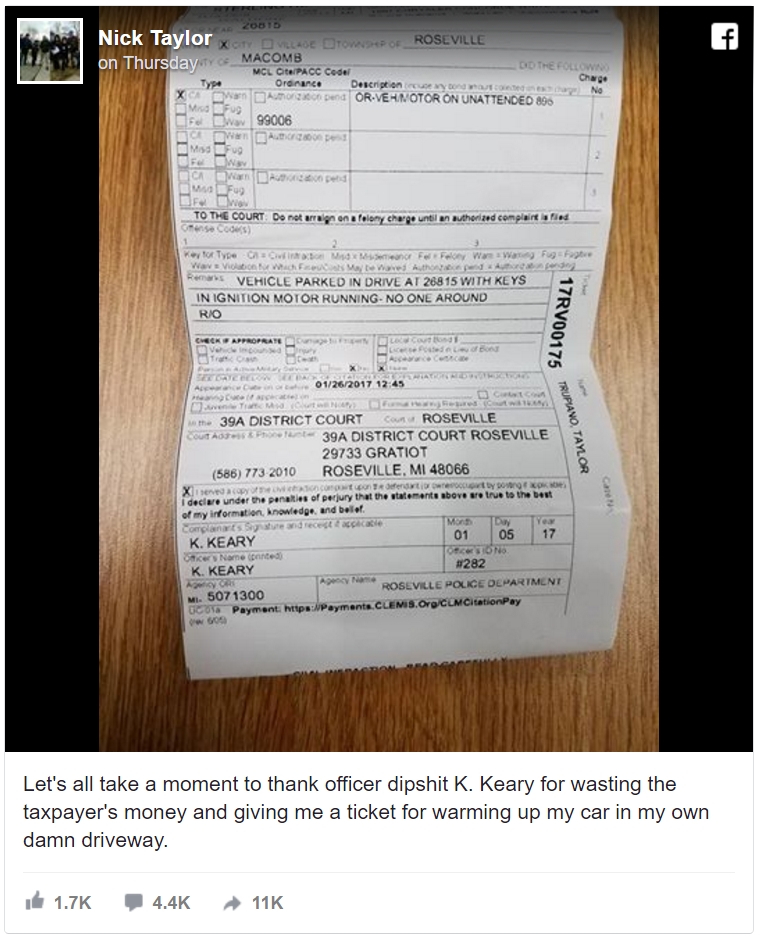 The ticket shows ordinance listed as 99006 but there is no ordinance in the city or state that corresponds to 99006. Under the description of the offense, it lists VEH/MOTOR ON UNATTENDED 895. Ordinance 895 is listed as being part of ‘rodent control’ on Roseville’s website.

FOX 2 contacted the Michigan State Police for more information. Lt. Mike Shaw says there is no state law that prohibits letting your car idle with the keys in the ignition.

Taylor posted a picture of the ticket on his Facebook page and called the officer an insulting name. It’s been shared more than 6,000 times and there are more than 5,000 comments.

“I mostly just put it online to see what people thought of it and see if it’s happened to anyone else because I’ve never heard of this,” Taylor said.

Chief Berlin said he is angry about the insults Taylor posted and he is not tearing up the ticket.

“You see the disparaging comments he made about my officer?” Chief Berlin said. “Drop dead.”

Taylor said he didn’t mean to call the officer a name, but he doesn’t want the ticket.

“Unattended car?” Taylor said. “I’ve done this every day for seven years. Every person warms up their car. We live in Michigan.”

Taylor is scheduled to appear in court later this month.