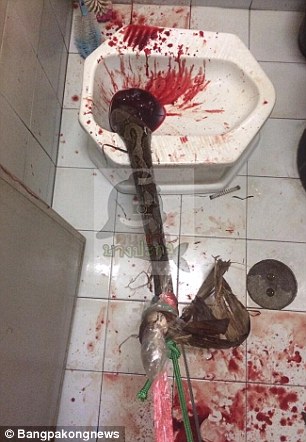 Atthaporn Boonmakchuay is a very unlucky guy.  While sitting on his toilet, reading the newspaper like all of us guys do, he felt something bite him.  When he went toi look, he found an 11 foot python clamped onto his penis.  They say that the python gained entrance to the toilet through the pipes.  Afterwards, they were able to get the snake out of the pipes and they released it back into the wild.

A man in Thailand suffered huge blood loss after a python sank its fangs into his penis while he was sitting on the toilet.

Atthaporn Boonmakchuay tried desperately to break free after the huge snake attacked in the bathroom of his home in Chachoengsao, east of the capital Bangkok.
The 38-year-old reportedly reached down with his hand after feeling a sharp bite – only to discover the serpent’s jaws clamped around the tip of his penis.

Atthaporn screamed out for his wife as he thrashed around trying to dislodge the 11ft python.

Moments before collapsing, he managed to tie rope around the snake’s head and tie it to the bathroom door.

But he was rushed to hospital after suffering horrific blood loss in the ordeal.

Footage shows emergency crews trying to ease the python out of pipes under the toilet and using hammers to smash it free.

The reptile was then made safe and placed in a bag ahead of being released back in wild, according to Bangpakong News.

There are reports that the snake had swam up pipes to the house before emerging in the bathroom.

According to the Mirror Atthaporn is in a stable condition in hospital.