A man was bitten by a strange bug and unbelievably left his arm swollen and full of bruises.

aking out the trash is something one Chandler, Arizona man does pretty much everyday, except this time it almost cost him his life.

Thomas Jay, 41, of Chandler, Arizona said it happened earlier this month when he was taking out the garbage.

“I saw a bug sitting on my arm about the size of a thumbnail, and before I knew it, I felt the most excruciating pinch you could ever imagine.”

“I just felt this excruciating pinch, this pressure, this bite or a sting … and [I] immediately went and swatted the bug off,” he told Phoenix’s KTVK.

And it didn’t stop there. Every hour, his arm was getting more red and more swollen. 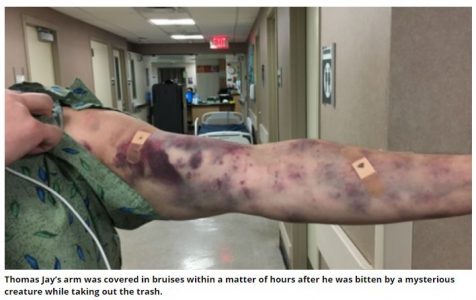 He sought medical attention but he said doctors couldn’t figure out what bit him.

According to Jay’s wife, Dee Petrov, the wound progressively got worse.

It looks like Jay’s arm was run over by a bus.

“I knew something was wrong, this was different,” he said.

Jay reportedly spent several days in the hospital and continues to suffer from itching and loss of strength in his arm.

“It started with one little round circle and became an emergency in a matter of hours,” she wrote on a GoFundMe page set up to help cover his medical bills.

Petrov said her husband believes the insect he swatted off his arm most resembled a solpugid, or camel spider.

Doctors, meanwhile, aren’t sure what bit Jay. They’re are waiting on the results of a biopsy.

His wife has been sharing photos of his progress on social media, in hopes their story might help others.

“I hope to give an overall story at some point with pictures to help anyone who this may happen to in the future … to be prepared,” Petrov wrote on Facebook. “We just don’t know that much about venom and how anyone will react.”