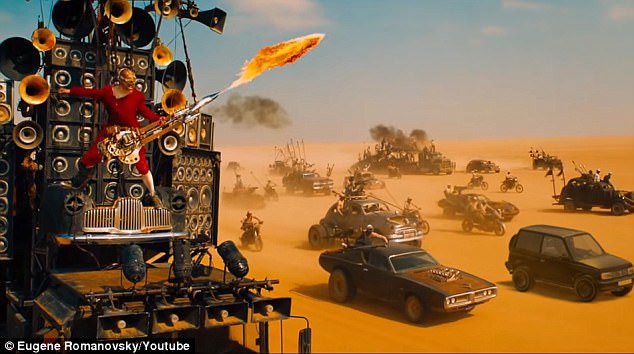 A Latvian special effects artist living in Israel wanted to sell his 21 year old second hand Suzuki automobile.  He decided to make a video using his cinematic skills and inserting his car into classic movies like Jurassic Park.  Two million people have now seen the ad.

Eugene Romanovsky, who is trying to sell his old Suzuki Vitara has made a two-minute video showing the SUV blasted into space, driving ino the moon, racing through the desert and even narrowly avoiding dinosaurs. More than two million people have viewed the ingenious video – which even includes a homage to Mad Max.

Romanovksy describes the 21-year-old car as his best friend over the past ten years. The first few seconds of the video feature the car spinning its wheels, pulling off the road and splashing through a ford. Suddenly the car is transported to the ledge of a mountain to demonstrate its 1.6 litre injection engine.

In the next frame, despite only pushing out 96bhp, it is seen powering up the side of an impossibly steep sand dune. Next the car is transported to the savannah where its environmental credentials are discussed. With 22 seconds gone, the SUV is seen racing against a cheetah.

But on 26 seconds, the normal wildlife are replaced by giant dinosaurs. Despite the age of the car, dinosaurs did not roam the earth in 1996. The car is then transported from Jurassic Park into a scene from Mad Max before moving to the top of a snow-covered mountain which results in an avalanche.

Despite the reckless disregard shown to the safety of the car, Romanovsky still hopes to find a buyer, even after it drops through some sea ice and into the ocean before it is blasted into space to dry off.