A man is in fear of his life and the lives of his family after he came into the possession of a 794 pound emerald that is said to be worth $310 million dollars.  Amazingly, it is said that the emerald has little value in jewelry making and instead it’s value is for display in a rich person’s home or a museum.

The man only identified by the initials FG has said the he hasn’t decided to do with the stone that is said to contain 180,000 carats of emerald.  He claims he has had inquiries from Europe, Arab Emirates, America, India and China who would like to negotiate the sale with FG.

The Carnaiba emerald was found by members of the Bahia Mineral Cooperative, a group of workers legally authorised to explore the area.

FG explained: ‘Extracting the stone was extremely difficult. It took ten of us more than a week to get it out because it was 200 metres down in the ground.

‘It was cut out of the area, where it was embedded, in one piece and all hands were needed to lift it to the mine shaft where it was raised to the surface by a winch.’

FG paid each member of the Coop for their share of the gemstone, leaving him as the sole owner of the Carnaiba Emerald.

This jumbo jewel was found in the same mine just one hundred metres from where the Bahia emerald was discovered sixteen years ago. 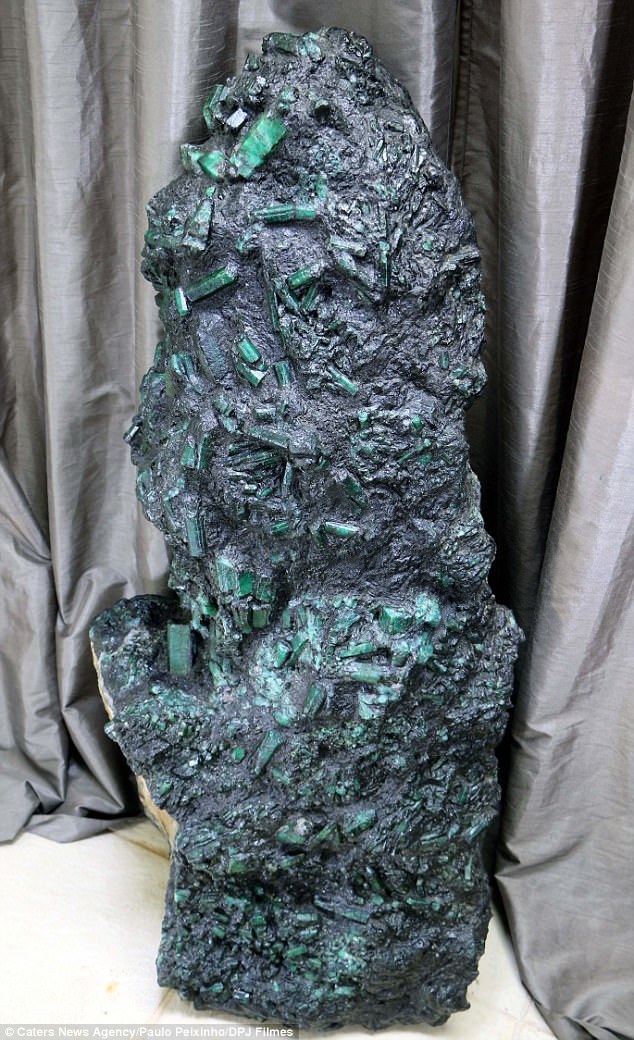 A confident FG said there is no risk of this happening to the new Carnaiba discovery.

His lawyer, Marcio Jandir, explained: ‘We have done all the issuance of the certificate of origin, a requirement of the Department of Mineral Production.

‘The owner of the stone will have the authorisation to do with it legally what he wants. And any transaction will be handled legitimately.’

FG said: ‘For now, I’m keeping the rock heavily guarded and out of sight until I reach a decision on whether to sell it or display it in museums here in Brazil.’