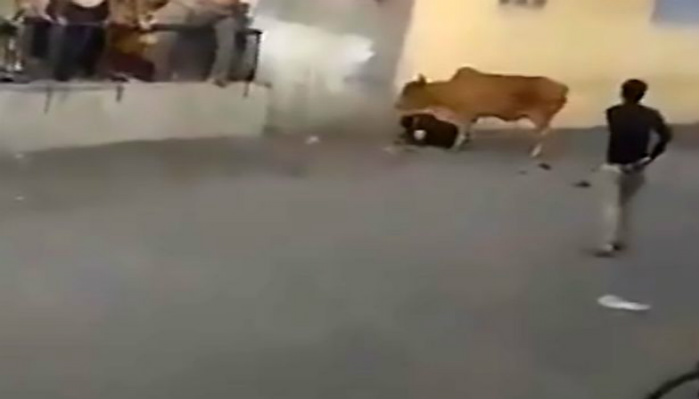 This is the horrifying moment a frenzied cow violently attacked a man in the street. The raging animal attacked Dinesh Prajapati, who was returning from work on a bike.

Crowds gathered on the streets of Surat, a city in Gujarat, India, as the 38-year-old commuter cowered on the floor before legging it round the corner of a building. Children lobbed stones at the crazed creature and ran up and down the street, in a bid to distract it and rescue the helpless man.

The cow was believed to have charged at the man, causing him to lose control of the bike and topple over. Lying injured in the road, the commuter tried to shield himself from the cow, which boxed him into a corner.

Neighbours in the adjoining buildings waved sticks at the cow and some even tossed things from upstairs windows in a bid to force it to leave. Young lads ran into the middle of the dusty road and threw stones, while one child leaned over a wall to whack the cow around the head with a stick.