A machete-wielding man has killed one and injured several others after going on the rampage through a German supermarket this afternoon.

The attacker, who reportedly screamed Allahu Akbar, ran into an Edeka shop in the northern city of Hamburg and knifed a customer to death before slashing at four others as he fled.

He ran off but was pursued by passersby who wrestled him to the ground and called the police who made an arrest. Heavily armed officers have locked the area down and police helicopters have been seen above the crime scene. A motive for the knifing has not yet been established. According to Bild, the man shouted ‘Allahu Akbar’ as he launched the attack in a branch of Edeka, Germany’s largest supermarket chain. A witness told the newspaper: ‘The man has suddenly struck out on customers, there was one dead and several injured.’

A major manhunt got underway and 30 minutes later pictures emerged of a suspect covered in blood, with a white bag over his head in a police car. He is understood to have suffered minor injuries as he was being held by bystanders.

Hamburg police said on Twitter that there was only one attacker and that the motive for the incident in Hamburg’s Barmbek district wasn’t immediately clear.

They added that ‘initial reports about robbery as a possible motive so far have not been confirmed.’

Police have been on high alert in Germany since a spate of attacks on civilians last year, including a December attack on a Berlin Christmas market, when a hijacked truck plowed into the crowds, killing 12 and injuring many more. 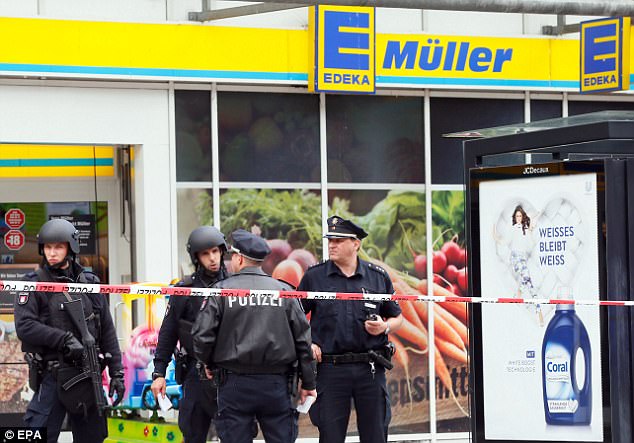 ISIS claimed responsibility for the carnage carried out by Tunisian rejected asylum seeker and ex-convict, Anis Amri, 24. It was Germany’s deadliest attack by Islamic militants, but not the first.

In 2016, the ISIS also claimed a bomb attack in the southern city of Ansbach which wounded 15 people and killed the Syrian attacker, and an Afghan man’s axe rampage on a train in Bavaria that wounded five, before the perpetrator was shot dead by police.