Black clad cowards are descending on Hamburg, Germany so they can make complete asses of themselves.  Of course it could be worse.  If Germany didn’t have a snowflake administration, they could put an end to this nonsense.  They are using water cannons which is like putting a band aid on an amputated leg.  Bring in the buses and cart the Nazis out en masse.

Hardcore anti-capitalist protesters have been hit with water cannons and pepper spray by German riot police after they attacked officers with bottles and stones at the G20 summit in Hamburg.

Police say they repeatedly asked a group of demonstrators to remove their masks and hoods but instead officers were hit with bottles and bricks – breaking the window of a riot van.

The violence broke out near the start of the demonstration at a riverside plaza used for Hamburg’s weekly fish market.
As many as 100,000 protesters from across Europe are pouring into the port city for a demonstration dubbed ‘Welcome To Hell’.

Up to 20,000 police officers were on duty to watch over the main demonstration, organised by the alliance of anti-capitalist groups.

Police are already investigating whether an overnight fire which burned down a luxury Porsche car dealership in Hamburg was an arson attack linked to the summit.

Demonstrators gathered at a riverside plaza used for Hamburg’s weekly fish market before setting off on a march through the city.

Organizers quickly called an end to the march after the violence broke out, police said. But skirmishes continued, with police advancing down the street with two water cannons while being pelted with bottles by a group of black-clad people.

A nearby building was plastered with the slogan ‘Borderless solidarity instead of nationalism: attack the G-20.’ A small group on the roof set off fireworks.

Police said windows at a furniture store and a bank were damaged. There was no immediate word on a number of arrests or injuries.
Protesters say the G20 has failed to solve many of the issues threatening world peace, including climate change, worsening inequality and violent conflicts.

The event poses a challenge for those tasked with securing the summit of leaders from the world’s 20 biggest economies, hosted by Chancellor Angela Merkel. 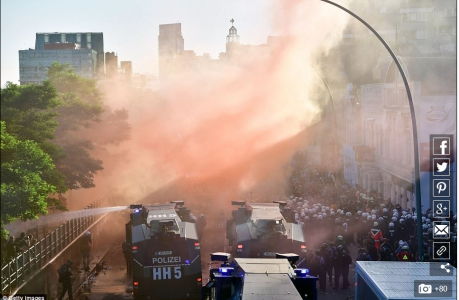