The decaying bodies of 15 suspected ISIS fighters have been found shot dead on the side of a road in Mosul. The men, all blindfolded and bound, are believed to have been killed and left out in the scorching heat by Iraqi militiamen who are rounding up terrorists.

They were found in territory held by government forces, around 20 km from the front line, where Iraqi troops are fighting to dislodge ISIS. Two of the men had been marched a short way into the field, where one was apparently forced to kneel before being shot from behind. 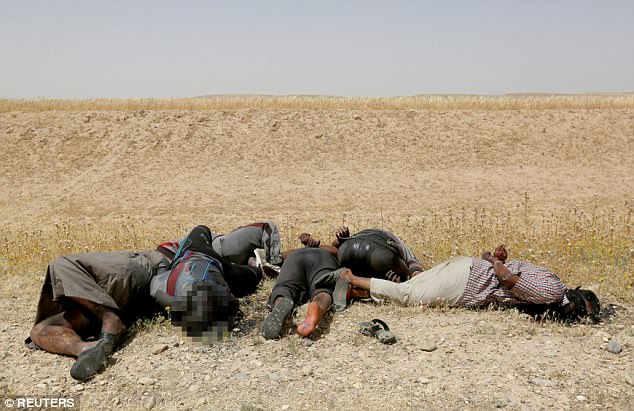 Prostrated beside him, the other man wore faded jeans. In his back pocket was an ID card: Qusay Mohammad, age 31. Human Rights Watch say the men were likely killed by forces affiliated with the Iraqi regime, who are rounding up thousands of suspects as they capture territory from ISIS.

‘It is hard to come to any conclusion other than that they were in the custody of government forces when executed,’ said Belkis Wille, Iraq researcher for Human Rights Watch.

With the information on the ID in Qusay’s pocket, Reuters was able to determine that he is on a government database of 90,000 men wanted across Iraq, including suspected Islamic State members.

All adult men emerging from territory held by the militants are screened against the database and anyone on it is liable to be arrested.
It emerged this week that a vigilante group in Iraq is killing men it claims are ISIS members, going as far as to create a Facebook group to boast of their revenge attacks.

Eleven suspected jihadists – again blindfolded and tied up – were found on the side of the road 20 miles south of Mosul. They are believed to have been killed by a vigilante group who call themselves the Hammam al-Alil Revolution. 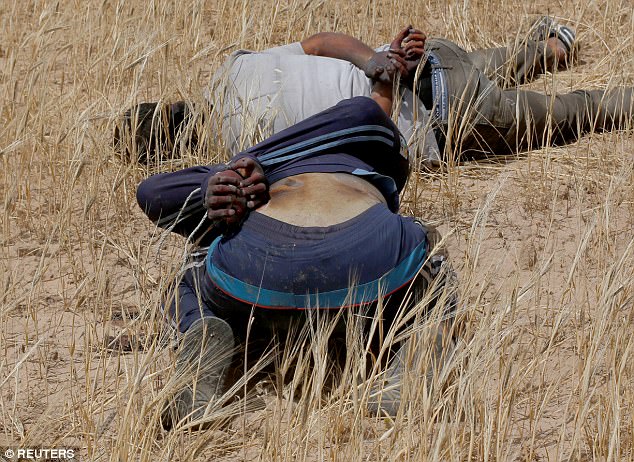 On its Facebook page, which now has 650 members, it tells supporters to ‘burn’ the families and homes of ISIS members. ‘Soon we will start our operation, we are now locating Deash families,’ reads the first post on May 28. ‘We will make them regret joining. Good luck everyone.’

The Facebook page launched six months after the town of Hammam al-Alil was liberated from ISIS. The second post on the page featured a photo of a grenade with the pin pulled out and told the story of an apparent attack carried out by one of its members. The Facebook page posts the addresses of dead and imprisoned ISIS fighters, encouraging its members to go after them and their families.

The group told its followers last month to ‘burn them and their families’. One member of the group told The Telegraph that it was carrying out attacks as revenge after his cousin was killed by ISIS militants.

The man, only identified as Omar, said: ‘It’s a reciprocity. They hurt my family, now we will hurt theirs.’ Ali Hamed Ahmed, 65, said that his family was targeted after three of his sons joined ISIS.

‘Our family is being punished for the sins of our sons,’ he told The Telegraph. ‘We have great shame for what they did, but they are not here now and this is our house. This is not right.’