Hannah Simmons, 23, her nine month old daughter A’lannah, and friend Lauren Buteau, 28, from Gainesville, Georgia, were killed in a car crash on April 25.  A woman Anisa Gannon took a picture to prove to her boss that she was trapped and it would make her late for work.  When she checked the picture, there was a strange beam of light shining down onto the car wreck.  They relatives of the deceased see it as a sign that their beloved friends and relatives were safe and being taken care of.

When Ms Noble looked at the photo, she said she instantly saw the ‘pathway to heaven’.

While many would attribute the light to a windshield glare or lens flare, Ms Noble said that was not the point.

She added: ‘I don’t believe in coincidences, especially the two “lights” inside that bigger light.

‘It brought the families peace, whether it’s a glare or not.

‘It’s indescribable, basically, and it does look like them leaving.
‘
Ms Noble tracked down the victim Hannah Simmons’ mother, Judy, who said the photo was a gift.

She said: ‘That picture was taken for a reason — to give me sanity. Hannah was also my best friend, and she’s looking down from heaven now.’

She added that Ms Simmons and Ms Buteau were best friends, just like their mothers, Judy and Dana.

Play this as you look at the picture tht’s causing such a stir: 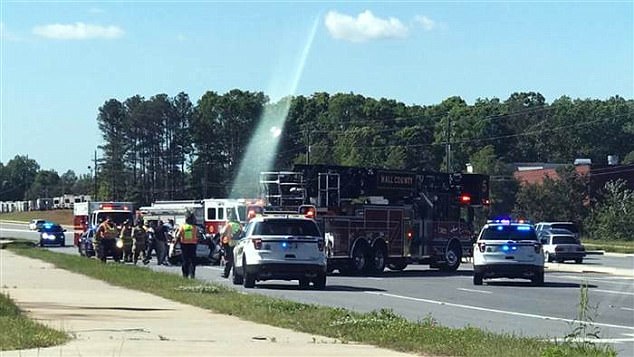