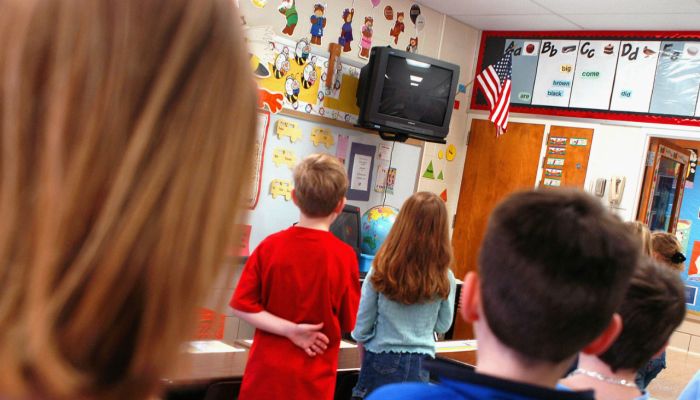 A mother in Terre Haute, Indiana has filed a lawsuit against one of her son’s teachers and his principal after they allegedly forced him to recite the Pledge of Allegiance.

According to Jamie Porter, her son’s first grade teacher removed him from class after he refused to recite the pledge in March. The ACLU has since filed a lawsuit on the family’s behalf to argue that the boy was “protesting.”

“He was doing it to protest the government of the United States, as it was racist, greedy and does not care about people,” the lawsuit stated, adding that the student “was extremely upset at this treatment by his teacher and the principal as he was made to feel that he had done something terribly wrong and was in trouble.”

After learning of the boy’s reason, his teacher Kelly McFarland pulled him into the hallway and took him to the principal’s office. Twenty minutes later, Principal Mary Beth Harris brought the boy back to class, but later that day, she pulled him out again so that he could “practice” saying the Pledge of Allegiance.

Porter and her son are seeking compensatory and punitive damages, and the mother implied that McFarland and Harris violated her son’s First Amendment rights.

The school district, Vigo County School Corporation responded to the incident saying, “We are currently reviewing the complaint with our legal counsel and have been advised not to comment on pending litigation.”