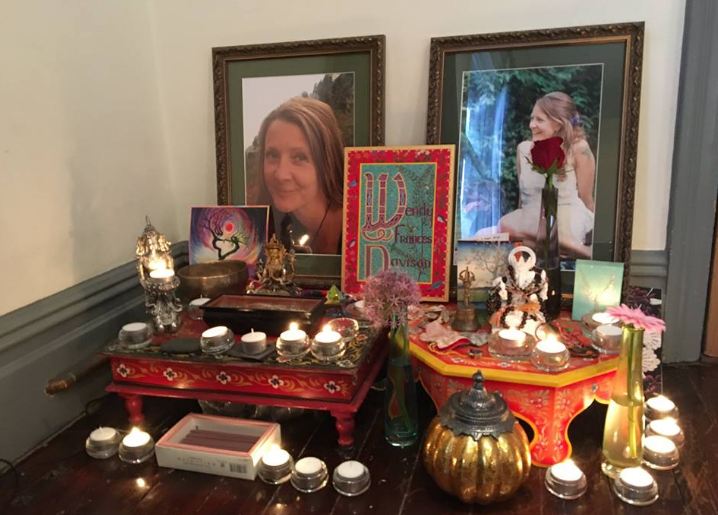 Russell Davison lost his beloved wife, Wendy, when she died on April 21 after a 10-year battle with cancer. She passed away peacefully in bed at home, surrounded by family and their dog, Elvis.

Davison hopes to change traditionally-held beliefs about dying. Speaking to the BBC, he explained, “I did not want her in the mortuary or handed over to a funeral director, I wanted us to take care of her ourselves at our family home, have her in our bedroom so I could sleep in the same room.” He added, “Death seems to be such a taboo subject in our society, no one seems to want to talk about it.”

So he wrote a beautiful and deeply touching memorial about his wife’s life and death on Facebook, which has now gone viral.

As he explains in the post, his wife was diagnosed with cervical cancer in 2006, and they decided to take a “natural approach” towards treating the illness, which Davison credits with extending his wife’s life “by a very long time.”

In 2014, Mrs. Davison was told she had only six months to live, so the couple decided to go traveling across Europe. They bought a caravan and adapted their jobs so that they’d be able to work remotely. They learned to snowboard and brought their sons to visit them “many times,” having “the absolute time of our lives, the sort of things dreams are made of.”

They went back to England in September, when his wife’s pain became unbearable. She received hospice care at the Royal Derby Hospital, but she didn’t want to stay there. So she was cared for at her home by her husband and family, and they decided that her body would stay in their home until the time came for her to be cremated.

Davidson wrote of her death:

Wendy died very peacefully , fully sedated, in no pain in mine and Dylan’s arms with our ever faithful dog Elvis smuggled up right next to her too. Within a short space of Dominic, Luke & Amy , Benjamin & Erica were all by her side too. After a while myself Amy & Erica gently and lovingly washed Wendy’s body, dressed her and placed her in her cocoon, it was very special. She looked absolutely beautiful, just like she always did in life, no effort, no makeup just radiant beauty.

In his Facebook post, Russell Davison discussed the “strong spiritual beliefs” that have guided the pair over the years. He wrote:

Wendy’s body is laid to rest in our bedroom. The picture above is the alter we have made to help honour her, it is at the head of her cocoon (we don’t like the word coffin) in our bedroom. We are sitting vigil with her body until she is cremated on Thursday. She will not be alone at all during that time.

Jak Ward, a contentious trusts and probate lawyer, told the BBC that it’s perfectly legal to keep a body at home until the funeral, so long as the death is reported and registered (Mrs. Davison’s doctor did report her death, as required). He explained, “Historically people would die at home and the body would be kept until the funeral.”

What a lovely tribute to an amazing-sounding woman. We’re honored that Davison chose to share his story with the public.