The former actor who played the Red Ranger in the 90s hit television series ‘Power Ranger’ is now charged with fraud in a large federal criminal case.

The Red Ranger actor, whose real name is Jason Lawrence Geiger, was among the 18 defendants who got charged with the fraud.

According to TMZ, the 47-year-old father of two – who played Red Ranger Jason Lee Scott in the 90s classic show – was handcuffed and arrested at his luxury home in Texas this week. Federal agents reportedly showed up at his home in the upscale neighborhood of McKinney holding AR-15 guns.

He was arrested on Thursday for his alleged involvement in a PPP loan scheme in Texas. The Eastern District of Texas U.S. Attorney’s Office said several people, including Sr. John, allegedly attempted to defraud the Small Business Administration Paycheck Protection Program during the 2020 lockdown.

Documents state that the 18 defendants received more than $3.5 million in total for 16 separate business loans. Additionally, the leaders of the alleged scheme were identified as Michael Hill and Andrew Moran.

St. John began his Hollywood career in 1993 when he was cast as Jason Lee Scott in the hit TV series Mighty Morphin Power Rangers. He left the show in its second season overpay but returned for guest appearances. The show was a rating winner and aired from 1993 until 1996. St. John also starred in the 1997 movie Turbo: A Power Rangers Movie.

“Austin St. John is a father, husband, role model and friend to many. The indictment detailed today is populated by a multitude of individuals – the majority of which Austin has no knowledge of, and has never met or interacted with. It is our understanding that Austin put his faith, reputation, and finances in the hands of third parties whose goals were self-centered and ultimately manipulated and betrayed his trust.”

“We expect Austin’s legal team to successfully defend against these charges and lead to his ultimate exoneration. We ask that you respect the privacy of Austin’s family in light of this serious situation, and thank you for your support.” 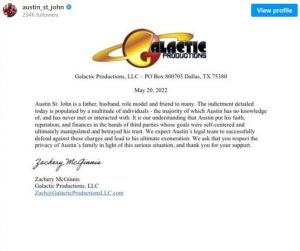