A terrified boy pleaded with the bus driver not to make him leave. But this heartless driver ignores the boy’s plea…

The video, shot by another student, shows a boy begging his bus driver to let him stay on the bus, asking him to drop him off at his house rather than the bus stop. The terrified boy is yelled at by the driver to get off the bus. After the 47-second-long video, the boy is forced off the bus and is then chased and attacked by an older student.

The clip shows that as the boy gets off the bus, an older boy waiting for him at the stop immediately jumps at him and attacks him.

The incident reportedly occurred at the Four Corners Church of God bus stop last week and the bus was from the Locust Grove Public Schools, according to News On 6 reports. Although the incident occurred last week, police officials were alerted about it on Thursday. 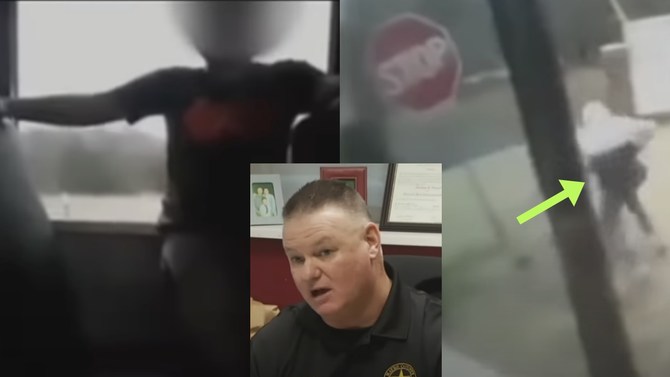 The boy can be heard: “You’re gonna kill and try to punch me,” before he is yelled to get down at the bus stop.

Major Rod Howell of the Mayes County Sheriff’s Office, while talking to KFSM, said: “The video is alarming itself and obviously, it’s enough to start an investigation.”

Howell also informed the outlet that police are investigating another cellphone video and two cameras on the bus, as well as working to obtain the black box on the bus to understand, thoroughly, what occurred.

Locust Grove Public Schools released a statement saying that both the student and the bus driver’s actions have been “addressed internally.”

“Locust Grove Public Schools had an incident take place January 17th on one of our school buses involving two students. The incident was turned over to law enforcement and the Mayes County Sheriff’s Office is conducting a complete investigation. The students’ and bus driver’s actions have been addressed internally.”

The school district is cooperating with investigators. Representatives would not, however, comment further as to whether the bus driver is still employed.