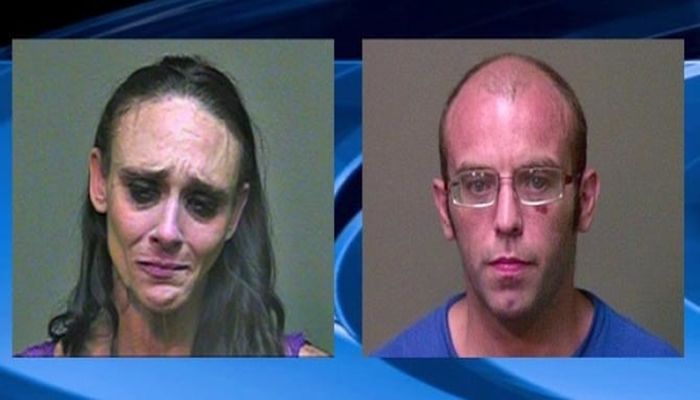 Two Oklahoma City residents are behind bars after a woman reported that they were abusing children. The woman told law enforcement officials that she saw the abuse occur when she stayed the night at Jamie Goodin and Jacob Baker’s home, KFOR reported.

According to her, she witnessed Goodin abusing her 7-month-old daughter while trying to keep her from crying. “She said that she witnessed a woman putting a pillow over a small infant, attempting to suffocate the child,” police Sgt. Jennifer Wardlow said.

The woman allegedly intervened, stopping Goodin from smothering the baby.

According to her, Goodin also told one of her kids that she would “break her neck if she did not shut up and leave her alone.”

The alleged witness also recounted an incident in which Baker pointed a BB gun at one of the kids, nearly shooting her in the face. He reportedly said that the kid was “the spawn of Satan and she deserves to die.”

The couple also allegedly admitted to the witness that they lock their kids in a room while they “shoot up” meth, according to the police report. The woman noted that the kids were also “starving,” and it was when she took the children for food that she decided to call 911. Emergency personnel arrived on the scene and the children were taken to a nearby hospital.

The infant of the home appeared to be malnourished and had a number of bruises as well as the “worst case of diaper rash they had ever seen.”

“We learned that the 7-month-old, once at the hospital, had some type of a brain bleed… a serious head injury,” Wardlow said.

Goodin reportedly had trouble giving police officers the names and birthdays of her children. Police noted in their report that Goodin couldn’t stop moving around and appeared to be on some sort of controlled dangerous substance.

“A very sad situation, obviously they’re in a better place right now,” Wardlow added. “Had [the woman who helped the children] not called, it’s possible. I mean, who knows how much longer these children would have stayed in this environment. “They could have been more seriously injured or even killed.”

Goodin and Baker have since been arrested and booked at the Oklahoma County Jail. Goodin was arrested on two counts of child abuse. Baker was arrested for two counts of possession of a controlled dangerous substance in the presence of a minor.

Upon hearing the story, several took to social media to voice their comments and concerns. “Thank God someone got involved and saved them from any more abuse,” wrote one reader. Another reader commented “I hope those children find a good, loving home to grow up in and have incredible futures.”