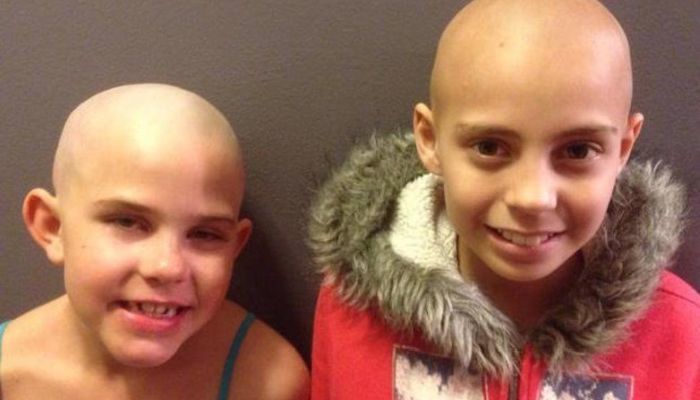 A third-grade student who shaved her head in support of her 11-year-old best friend with neuroblastoma cancer was suspended from school for violating the dress code.

“Since Delaney [Clements] is my best friend, I decided to shave my hair because I didn’t want her to be the only one,” Kamryn Renfro said.

Her school, Caprock Academy in Grand Junction, Colorado, found her shaved head to be in violation of the school’s dress code and she was not allowed to attend class. Kamryn was told she could return when her hair grew back.

“I couldn’t go to school because of my shaved head,” Kamryn said. “I wanted to share my story but they didn’t let me.”

According to school officials, shaved heads are banned due to being a distraction.

“Initially, I was furious,” Kamryn’s mom, Jamie Renfro said. “We still really respected the dress code. We just didn’t agree with it.”

After Jamie shared on Facebook what happened to her daughter, and anger towards the school occurred, a special meeting of the charter school’s board of directors was called. The topic was to discuss whether an exception would be made towards the dress code policy’s of forbidding students from coming to class with a shaved head.

“Words can not express how humbled my family is from all the support that our friends, family, and even people we have never met before, have shown us through this ordeal,” Jamie wrote on Facebook.

In the statement that announced the special meeting, Caprock Board of Directors Chairwoman and President Catherine M. Norton confirmed that shaved heads were not permitted, and that the school dress code was “created to promote safety, uniformity, and a non-distracting environment for the school’s students.”

The school board decided that Kamryn could attend school with a shaved head.

“She got up, got ready, and held her head high as she walked into her classroom this morning,” Jamie posted on Facebook the morning Kamryn returned to school, according to The Daily Sentinel. “To say her dad and I are proud, is a total understatement.”

In a statement to Kamryn, school officials said “compassion and selfless acts of courage are to be commended and encouraged.”

“Kamryn did such a selfless thing for my daughter,” Delaney’s mom, Wendy Campbell told Good Morning America. “She really taught a lesson in integrity.”

Jamie does not blame the school or the board of directors, but wants to see the school’s dress code policy changed.