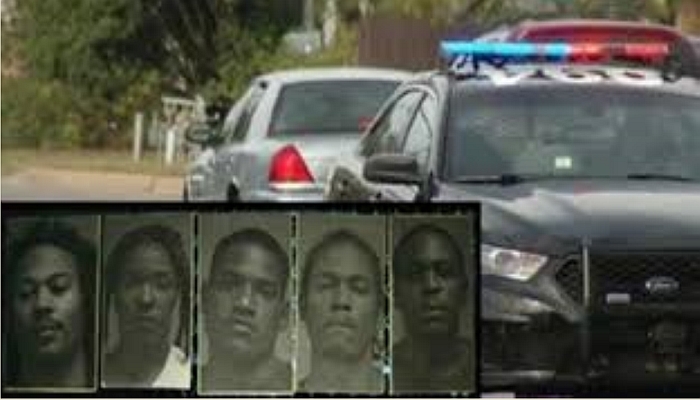 Five people allegedly involved in a traffic stop incident in Oklahoma have been arrested for attempting to kill police.

According to court documents, Tavone Payne was driving alone at about 9:30 p.m. on Dec. 8, and was pulled over by police. When the pair of officers walked over to Payne’s car, he was reportedly on his phone.

The officers say they ordered Payne to get off his phone, but he ignored their warnings. An officer says he overheard Payne asking someone else to come to the traffic stop. Two more officers were called in for backup and Payne was put in the back of their patrol car for a license violation, according to police.

Suddenly, four men allegedly began shooting at the officers from behind just as the cops were searching Payne’s car. The officers ducked for cover behind their patrol vehicles as the bullets struck the sides of their cars, reports KWTV. One officer says he later found a stray bullet trapped inside his coat pocket.

The four suspects then fled the scene, reportedly thinking they had killed at least one officer. One of the suspects dropped his sweatshirt and a handgun while running away.

Now, investigators believe the suspects ambushed the police and attempted to kill them in a premeditated attack.

Police have arrested all five suspects accused in the involvement of the shooting: Tavone Payne, Donye Smiley, Trent Colbert, Marcus Robertson and Samuel Carolina. All five suspects have lengthy criminal records and are currently in custody.

They have been charged with several felonies, including four counts of shooting with an intent to kill, assault with a deadly weapon and conspiracy to commit a felony.

Because Payne is believed to have been a decoy, his charges were substantially lighter than his alleged accomplices, only receiving a possession of marijuana charge, according to Blue Lives Matter.

All the officers walked away without major injuries. Only one officer was left marginally wounded, but has already fully recovered.