Ariana Grande superfan Georgina Callander, 18, was one of the 22 people killed along with the attacker who set off an explosive device at the end of the concert in Manchester Arena.

The devastating explosion that occurred in Manchester last night has claimed many victims. A lone man detonated an improvised explosive at the end of an Ariana Grande concert at Manchester Arena at 22:35pm yesterday, taking the lives of 22 people with him.

Fifty nine are confirmed to be injured, with their wounds currently being treated by the heroic emergency services in the area. Authorities are still working tirelessly to help friends and family find their missing loved ones. Tragically, some of the missing will fall into the 22 killed.

The first victim of the suicide bombing has been confirmed as teenager Georgina Callander. According to her friends, the 18-year-old was one of the first to be rushed to the hospital after the attack. The teenager died in hospital with her mother by her side.

Georgina was a huge fan of Ariana Grande, called a “superfan” by her friends. She even tweeted the American singer on Sunday, replying to an Instagram post Grande had shared showing her arrival in England. She wrote: “SO EXCITED TO SEE YOU TOMORROW.”

Georgina fulfilled her dream of meeting Ariana Grande in 2015, where the two grabbed a photo together. They posed for the photo and Georgina later posted it to social media along with the caption “Thank you for everything my love I miss you.” 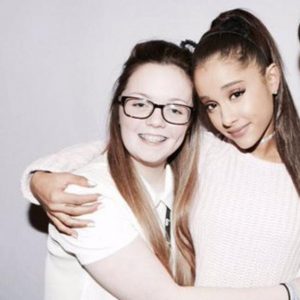 Georgina’s friends paid tribute to her on social media in these heartbreaking messages. Her friends have stated that they were “so lucky to have met you and known you”, and “I love you so much and will always miss you”. 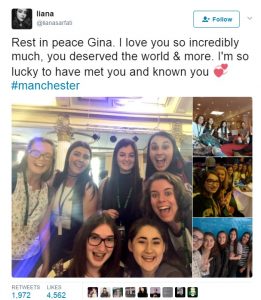 Her best friend Sophie continued to describe the teenager as a selfless person and a wonderful friend. “There was not one bad bone in her body,” Sophie explained, “she was a true ray of sunshine and loved everyone for who they were”.

Actor Sean Maguire tweeted that he had met Georgina earlier this year. Looking back on their meeting in April, the TV star described her as “so young & sweet”. He expressed love for her and all the families of the attack’s victims.

In the aftermath of these tragic events, Ariana Grande posted her reaction to the incident online. In the tweet, she describes herself as “broken” writing “from the bottom of my heart I am so so sorry. I don’t have words”.

The Greater Manchester Police have provided an emergency number for anyone concerned about loved ones who may have been in the area. If anyone you know has not yet returned home, or if you wish to contact these services to provide information, please phone the following number:

In addition to this emergency telephone number, relatives and friends of those who have not yet been located are raising awareness via the hashtag #MissingInManchester on social media.

During this time, our thoughts go out to those affected by the attack, their friends and family.