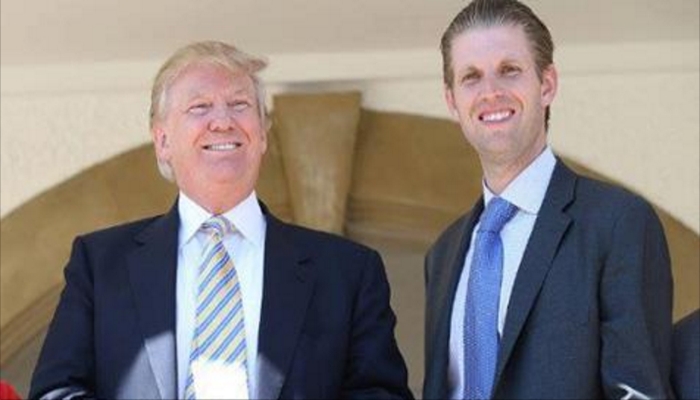 “[Lara Lea Trump] & I are excited to announce that we are adding a boy to #TeamTrump in September,” he tweeted. “It’s been an amazing year. We are blessed!”

Adding to their excitement, it’ll be the couple’s first child.

Lara — who is now in her second trimester — says that although it was hard at first, she is doing well now.

“I was exhausted in the beginning,” Lara said. “It surprised me, because I’m a very active person, and until the fatigue hit, I didn’t believe it would actually happen to me. It really affected me. But I’m feeling really good now.”

Eric, 33, told People magazine they found out about the baby on his birthday, Jan. 6 — a few weeks before his father was sworn in as president. 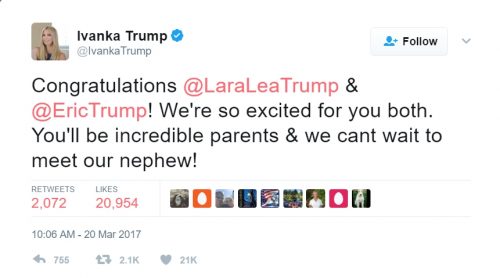 “We found out on my birthday, which was pretty cool,” he said.

While they told family, they struggled to keep the news a secret from the public.

“Eric’s dad was so excited,” Lara said, referring to President Donald Trump, “that we were worried he’d blurt it out at a press conference.”

Now the world knows their secret, their focus has turned to the next worry: what to name the baby.

“We really loved the name Charlie, but we’d already named our dog that, so it’s out,” Eric said.

While they worry about names, there’s ironically one thing much calmer about: actually becoming parents.

Lara says she doesn’t feel nervous. She explains she has always wanted kids and feels their nieces and nephews have given the couple some experience already. Lara was formerly a producer on “Inside Edition” and now works with various animal charities.

“Eric’s going to be an amazing dad,” Lara says. “The nieces and nephews love hanging with him. He’s the cool uncle. He’s watched ‘Frozen’ many times.”

The president and other family members congratulated the couple on Twitter.

“Congratulations Eric & Lara,” President Trump tweeted. “Very proud and happy for the two of you!”

“Congratulations [Lara Lea Trump] & [Eric Trump]!” she wrote. “We’re so excited for you both. You’ll be incredible parents & we cant wait to meet our nephew!”

According to Time magazine, the new baby boy will be the president’s ninth grandchild.