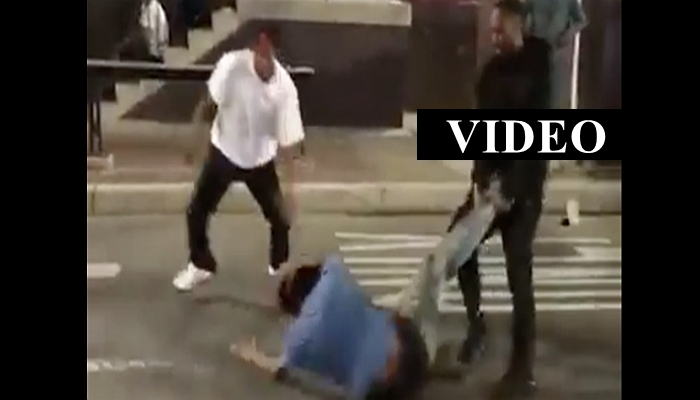 Detroit residents beat each other senseless in the streets over the Easter weekend and some of the cold-blooded brawl was live streamed on Facebook.

“This is totally an unacceptable situation,” Detroit Police Chief James Craig said, according to The Detroit News. “We know who you are, so turn yourselves in and we’ll work with you.”

The video opens with a man lying lifeless on the sidewalk, accompanied with a cacophony of expletives and shouting. The camera then turns toward a circle of several men brutally stomping and punching an apparent victim. Another man lying on the ground is grabbed by the leg and helicoptered by a person before being pummeled by a flurry of fists.

Bystanders, who may or may not have contributed to the riotous brawls, are seen laughing at the spectacle and seemingly don’t do anything about it. The recorder of the video even appears to shake hands with one of the onlookers, appreciating the violence.

Craig says that police have photos of the men captured in the footage, and are also trying to identify the featured vehicles.

“It’s not going to be difficult to identify you,” Craig said, directly addressing the criminals. “We have images of the vehicles, but also license plate numbers. In a matter of hours we will have [the suspects’] identification.

While not much is completely audible in the video, the phrase “oh shit!” can be repeatedly heard in the beginning.

After a couple more people punched the man who never moved once throughout the video, a guy wearing a red shirt is seen raising his hands trying to stop the savagery.

Police eventually arrived at the scene, but after the assailants leave.

The family of the man who was punched and stomped in the face multiple times said he was in the area to celebrate his birthday at a nearby casino, according to a Fox2Detroit.

The victim reportedly has a fractured skull and suffered serious internal bleeding. He is currently being treated a Detroit hospital.

“I was hurt to my soul that you would still keep hitting somebody that is unconscious and you kicked him in his face,” the man’s sister told Fox2Detroit.

“We’re not going to put up with this. People need to know: If you’re going to do this sort of thing, we will respond,” Craig stated. “There was the case in Chicago recently, where a sexual assault was videotaped. It’s extremely troubling that people can video these crimes in progress for Facebook, but they can’t call the police.”

Facebook Live and the capabilities of social media in general have been a contentious topic recently as a number of crimes and horrific situations have occurred while using the platforms.

Two young girls both below the age of 15 took their own lives while using a live-streaming service. An aspiring actor did the same, committing suicide in North Hollywood earlier this year during a session on Facebook’s live streaming service.

Three men were arrested in January on suspicion of gang-raping an unconscious Swedish woman while broadcasting it on Facebook Live.

Four suspects in Chicago infamously live streamed their torture of a mentally handicapped man in January. All four of the alleged perpetrators pleaded not guilty in February to multiple felony charges, including aggravated kidnapping and aggravated battery.