A Washington, D.C. firefighter has been placed on administrative leave and is under investigation after making comments on social media urging citizens to murder “racist cops” and their supporters.

“These racist ass cops who are murdering our people need to start turning up the same way,” Norman Brooks posted in a now-deleted Facebook post reacting to a recent police shooting in Louisiana. “They shouldn’t feel safe walking the streets and neither should their supporters.”

“Protesting is a lost cause and it makes us all look like a bunch a pussies…” he continued. “It’s time to stop praying, stop protesting, start buying guns, and start protecting ourselves from those crooked ass racist cops. If you are a cop and not in support of these people then its about time to start turning these motherfuckers in or at least giving out some addresses so we the people can handle em.”

In another post, Brooks clarified that he was indeed calling for citizens to murder racist police officers. “The answer is ‘yes’…I’m saying the citizens should take the law in their own hands and target racist cops. Those pigs in Baton Rouge deserve nothing short of a bullet in their heads. See how their families feel after that,” he posted.

The local chapter of Black Lives Matter, however, expressed their solidarity with Brooks in a tweet: 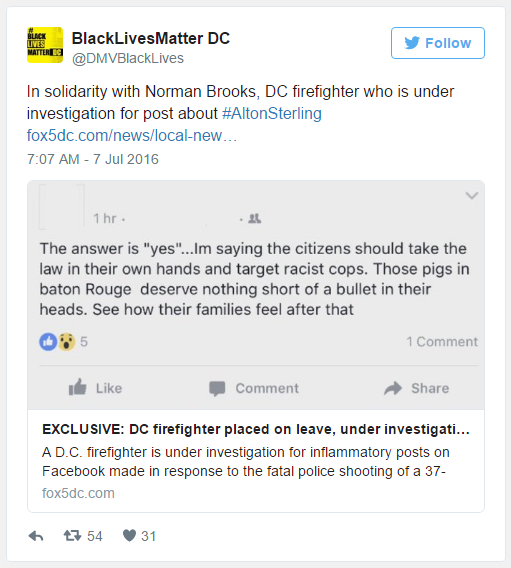 The D.C. Fire department confirmed in a statement to Fox 5 that they were aware of the comments: “Immediately upon learning of the allegations, Norman Brooks was placed on Administrative Duty pending the outcome of the law enforcement investigation as well as an internal review by the DC Fire & EMS Department.”

Brooks explained that his, since deleted, posts were in reaction to the much-publicized shooting of 37-year-old Alton Sterling by two Baton Rouge, Lousiana police officers. One of the Facebook comments by Brooks said, “Those pigs in baton Rouge deserve nothing short of a bullet in their heads.”

FOX 5’s Tisha Lewis spoke with Brooks later on Wednesday and he explained why he wrote the posts on his page.

“First and foremost, I don’t condone any cops being hurt or anything like that,” he said. “My post was in regard to something that happened in Baton Rouge, Louisiana this morning where what appeared to be two rogue cops shot a man who was on the ground pinned by police in cold blood. Amongst many things that have been happening in this country over the past couple of years, all of these police officers have been walking. I do not condone any violence against any good, innocent people, cops or whatever.”

“All I’m saying is that if anybody, whether it is a criminal cop or a criminal person, tries to attack you or makes you feel some sort of way inside your own community, you have a right as an American citizen to defend yourself. And that is all I put in my Facebook status. Anyone else who received that differently, then I don’t know what to tell you because I have never committed a crime in my life. I love my people and I said what I got to say.”

Brooks said he is frustrated by the lack of punishment for officers in other police-involved shooting incidents of black men across the country.

“All I am saying is that if a person off the street commits a crime, they are punished for it,” Brooks said. “These people are not being punished. I don’t wish any harm on any innocent people or anyone in that instance. That is what my post is about. Maybe I used strong language, but that is just what it is. These events are starting to affect me, my family and my friends. And if you are a black person out there or just a concerned American, and you are not concerned about it, I feel sorry for you.”

Brooks said he apologizes if he offended anyone with his social media comments, but told us he has done nothing wrong, hasn’t broken any laws and was just acting on his freedom of speech.

Brooks also said he could have “used a couple better choice words” when it came to his thoughts on Facebook. But when asked if he regrets making the posts, he responded, “I reacted as soon as I saw that video and as soon as I read what happened. It was a reaction to a horrific event. I’m pretty sure a lot of people when they saw 9/11 happen, they made some very strong statements about a lot of people. I’m sure they would take those back maybe somewhat if they were given a chance to think about it again. All I am saying is that I am a man reacting to the horrific things that are happening to my people in this country. I have no ill will to police officers.”