Country music superstar Luke Combs played back-to-back sold-out shows in Bangor this weekend on his ‘The Middle of Somewhere Tour.’

During Friday night’s show, he made quite an impression on two young fans. As it turns out, they worked hard to get the money for tickets to attend.

12-year-old Bo Fenderson, and his friend, Tanner Hale, wanted to attend but had to hold up their end of a parental bargain to get there.

“I prayed for it to happen. I hoped. I prayed, and it happened,” 12-year-old Bo Fenderson of Cornish, Maine said.

Luke then called them to the stage and then, THIS HAPPENED. Just more proof Luke Combs is the best!

“The concert was brought up and it was an immediate, yes. But, the tickets were pricey so it was, ‘Well we can take you … and earn and you know if you guys could buy your own tickets, we could make a half’ and they said yes, and I think it was a great lesson for both of them, and for all of them.”

During Friday night’s show at Maine Savings Ampitheater, Luke spotted the young fans’ homemade sign in the crowd that read:

“We made 100 bucks stacking 5 cords of wood, bought 2 Luke Combs tickets, man he sounds good,” read one sign, according to WCSH-TV in Portland.

“Our dads swore it was a waste of time, oh but they were wrong! Today’s my 12th birthday oh Lord when it rains it pours!” the other sign read. 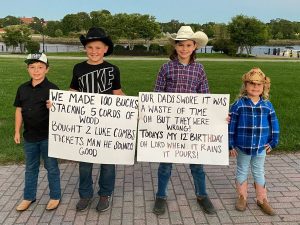 The reigning CMA Entertainer of the Year signed their hats then told them he would invite them backstage after the show.

He kept good on his promise.

@lukecombs our wish came true last night and we got to meet you. Never thought it was really going to happen you made our night and my cousins bday thank you so much we will never forget it. You are the best and your show was awesome can’t wait to do it again. pic.twitter.com/fqyK3UNKbO