Connie Nielsen from the movie “Wonder Woman” was greeting fans outside the AOL Building in New York City, when a gust of wind whipped through it lifted her dress and revealed that she had forgotten her underwear. The 51 year old actress put on quite a show for her fans.

She has been dazzling with her fashion choices during the promotional tour for her new film, Wonder Woman.

But Connie Nielsen suffered a serious wardrobe malfunction on Wednesday, when she accidentally flashed crowds outside the AOL building in NYC.

The actress, 51, gave onlookers a glimpse of her derriere as she went underwear free in her chiffon red dress – which awkwardly whipped up in the wind as she signed autographs for fans.

The Danish beauty looked stunning in her chic red shirt dress, which featured a statement cut out sleeve and trendy mixed-length hem.

However the flippy skirt soon caused things to go awry during the actress’ appearance, when it blew up in a gust of wind – accidentally revealing her bare posterior and legs underneath.

Yet, Connie seemed completely unfazed by the incident as she continued to pose confidently for cameras – showing off her look for all to see, and putting the blunder behind her.

The redhead exuded glamour as she beamed for cameras in the frock, which she paired with sexy thigh-high boots of black suede to elongate her already leggy figure.

While she carried a classically chic beige handbag, the Gladiator star then accessorised with dramatic gold earrings which hung in the shape of a sword, to add a trendier touch to her look.

Leaving her hair in tousled waves and adding a subtle smoky eye and peach lip, the mother-of-two displayed her natural beauty and enviably youthful complexion as she posed ahead of the talk at AOL 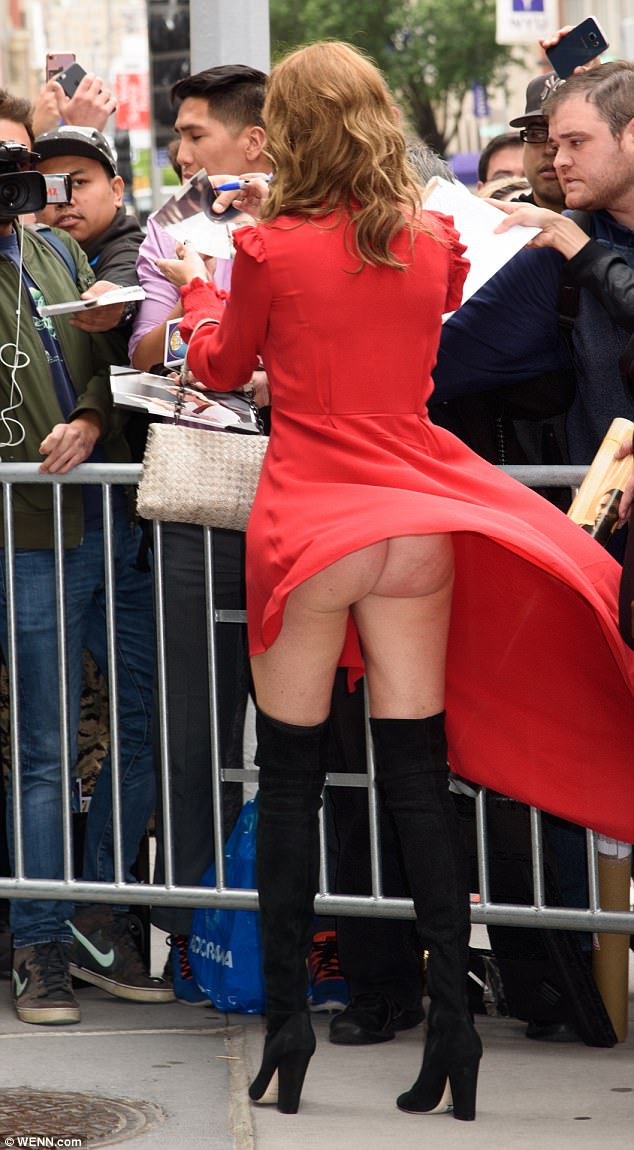