Colin Kaepernick has done another thing to get some media attention. He just took a picture wearing a t-shirt with a message that has horrified people.

Kaepernick’s rose his fame last year from his bench seat on the San Francisco 49ers when he refused to stand for the playing of the Star Spangled Banner. Its started as a simple of act of protest concerning police brutality toward black people and minorities evolved into a movement that affected sports teams across the country. After the incident,  Kaepernick acts became an entire high-school’s inspiration and were refusing to stand for the anthem, young people were looking up to Kaepernick as a hero.

Chuck Modi a Twitter user, was one of the first people to report on Kaepernick’s choice of casual wear. The t-shirt carried a heated political message. Here’s what his shirt read: 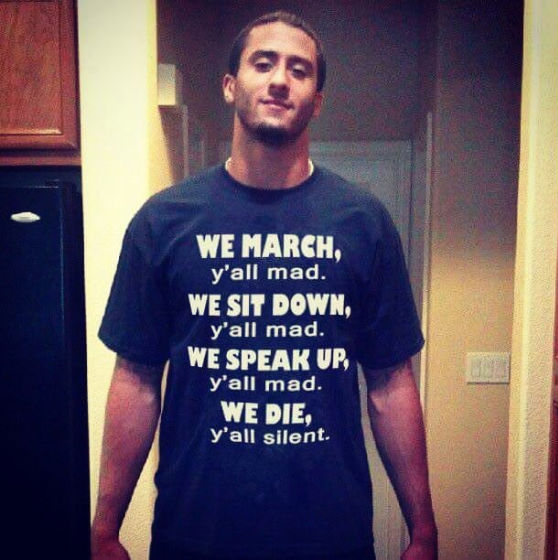 While Kaepernick revels in his recent unemployment, Regan Pifer writes that the former backup quarterback has a lot of time to think things through.

Other NFL players would probably be looking for ways to get back into the game, but Kaepernick has turned his attention to political activism. He has begun tweeted statements like “comparing modern day police officers to slave catcher.”

Last month when the police officer was cleared for the death of Philandro Castile last summer, Kaepernick shared the following on social media much to the chagrin of Blue Lives Matter people:

You can’t ignore your history. Always remember who they are” which was captioned on an image of two police badges. He then added:

“A system that perpetually condones the killing of people, without consequences, doesn’t need to be revised, it needs to be dismantled.”

Kaepernick’s opponents would argue that America has a “system” that “condones violence.” Because Philandro Castile’s killer went through the legal process, they believe that proves his vindication.

One source wrote: “Twelve people sat on this jury for two weeks, including one black woman and one black man. Presumably nearly 17% of that jury, a larger population of black people than exist in the country at large… Yet this jury, which spent two weeks reviewing all evidence instead of watching a video online for two minutes, unanimously agreed that the police officer in this case was not guilty on all charges.”

The source went on to talk about the ramifications of this decision:

The source that explains that anyone upset with the case should blame the jury instead of the police officer who pulled the trigger.

Do you agree? What do you think about Kaepernick’s protest?