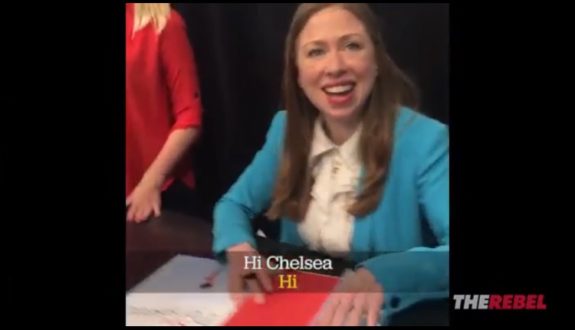 Chelsea Clinton hasn’t learned one important lesson yet.  Surround yourself with goons that will keep out the inconvenient guest.  Chelsea was at a book signing in NYC for her new book, “She Persisted” hoping that it does well, so she can support her out of work husband who squandered $90 million dollars of other people’s money by investing it in Greek debt.

She claimed she wrote the children’s book for this type of person.  “I wrote this book for everyone who’s ever wanted to speak up but has been told to quiet down, for everyone who’s ever been made to feel less than.”  Then when she was asked to dedicate a copy of her book to someone who falls into that category, she shut up like a clam.  Did I mention that person was Juanita Broaddrick?

Chelsea was touring in support of the children’s book “She Persisted,” a feminist screed named after Sen. Mitch McConnell’s famous remark about Sen. Elizabeth Warren’s disgusting personal attack on Jeff Sessions during his nomination hearing for attorney general.

So, one political activist came to a book signing in New York City and decided to ask about getting the book dedicated to someone who’s “been made to feel less than” by the Clinton family.

The encounter began with some pleasantries between Clinton and The Rebel’s Laura Loomer. That’s when Loomer dropped the hammer.

“Because this book’s for everyone, including women who have wanted to speak up but have been told to quiet down, can you sign it for my friend Juanita Broaddrick, because she’s been silenced by your parents, especially Bill Clinton who’s a rapist? Can you sign it for her?”

Clinton, who definitely looked uncomfortable, passed on the opportunity and thanked Loomer for coming — even though Loomer persisted. Isn’t that what Chelsea’s supposed to be encouraging, anyhow?