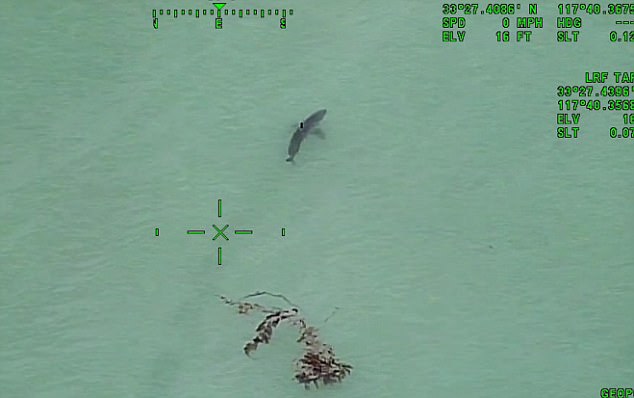 Beachgoers in Orange County, California were warned not to go into the water as police spotted 25 Great White Sharks were swimming just off the coast.  The county sheriff’s helicopter spotted them clearly from the air.  The sudden appearance of so many sharks off the coast are being blamed on global warming and Donald Trump’s election.

‘We have paddleboarders and swimmers in the water and we have an excess of about 15 sharks in the surfline … Do you want us to make any announcements?’ one asked.

‘We have some people real close to some of the larger ones.’

Moments later, authorities made an announcement to people who were in the water not far from some of the sharks.

The beachgoers were paddleboarding in the waters off Capistrano Beach in Orange County.

Later in the evening, another group of great white sharks were spotted more than 50 miles north of Orange County off the coast of Long Beach, according to the OC Register.

Chris Lowe, the director of the Shark Lab at Cal State Long Beach, has been studying the recent shift in great white behavior in Southern California.
‘Ocean temperatures are rising, causing them to live in places they’ve never lived before,’ Lowe told the OC Register.

‘Populations are coming back. And ocean conditions may be pushing them to new places.’

Lowe said the part that is unknown is the extent to which global climate change is affecting marine animals in and near Southern California.

The El Nino winter of 2014 and 2015 brought on an interesting change in behavior of a group of juvenile sharks that made Surfside in Huntington Beach their home, year-round.

Instead of migrating south in the winter that year, the sharks remained in the area.