“Maybe someone will assassinate him,” quipped Maycie Thornton, BuzzFeed’s Director of Social Media, according to screenshots from the website’s Slack group obtained by Big League Politics.

“Lol Maycie I have thought the same thing,” chimes in Kari Koeppel, the site’s Video Research Manager, after which Guillory writes “but I meannnnnnnnn [sic].”

Former BuzzFeed employee Tim Treadstone, a Trump supporter, provided the screenshots to Big League Politics and spoke to the site about this incident, as well as BuzzFeed’s treatment of conservatives.

“This was not the first time BuzzFeed employees talked openly about wishing President Trump would get assassinated,” asserted Treadstone, “they hated conservatives so much they even held an office party when Justice Scalia died. It was a toxic environment and you were declared a heretic if you were a Trump supporter, bottom line.”

Several BuzzFeed employees confirmed that the site discriminated against Treadstone because of his conservatism, reported Business Insider. Ben Smith, editor-in-chief of BuzzFeed, denied Treadstone’s account on Fox News on Wednesday. 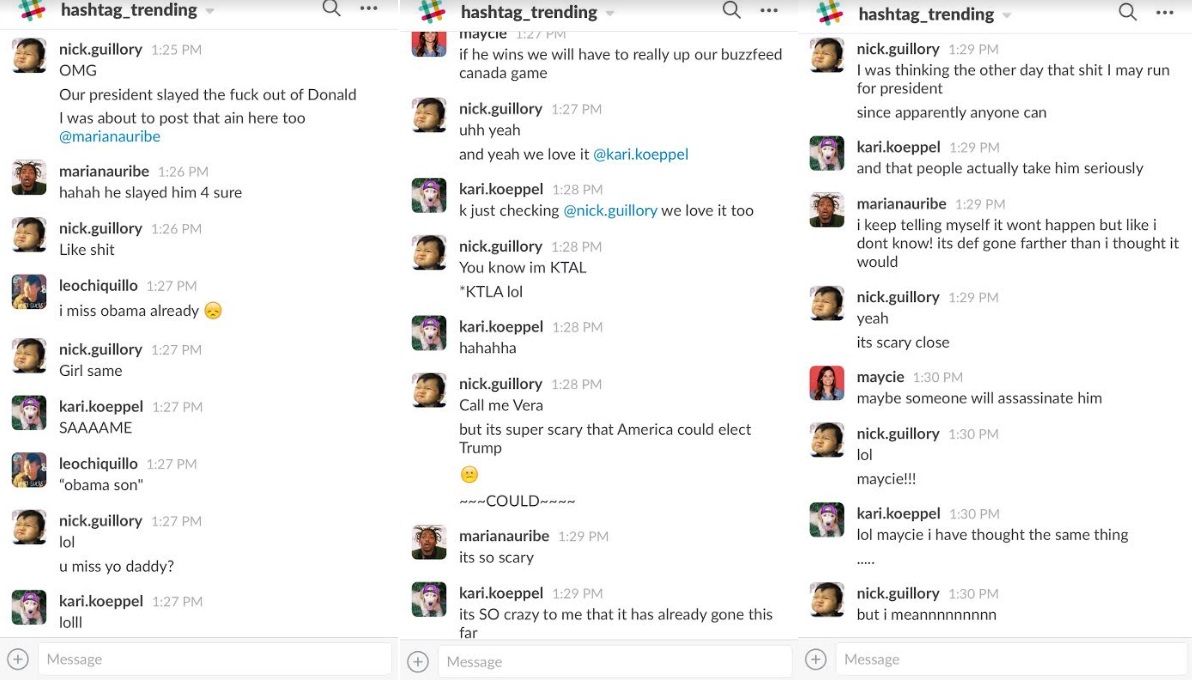 “While the remark in question is regrettable, it was made in private by someone who is not a reporter nor even an employee of BuzzFeed News,” said Matt Mittenthal, a spokesman for BuzzFeed News. “Attempting to turn a throwaway comment from an entertainment employee into evidence of bias at an affiliated news division is ludicrous.”

When asked whether BuzzFeed employed Thornton, Mittenthal responded that “BuzzFeed News and other BuzzFeed divisions (entertainment, food videos, Tasty) are totally separate,” suggesting that to hold the former accountable for statements made by employees of the latter divisions would be like “hitting ABC News for something a Disney employee said in private.”

The Daily Caller News Foundation reached out to BuzzFeed for comment and will update the piece should the site provide one.