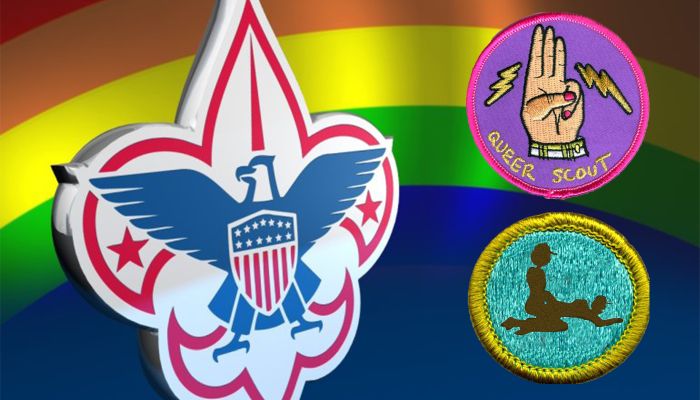 The Boy Scouts of America announced on Monday that it will now allow girls who dress up as boys and pretend they are boys to join the organization.

“However, that approach is no longer sufficient as communities and state laws are interpreting gender identity differently, and these laws vary widely from state to state,” the statement explained.

Henceforth, the Boy Scouts will ignore biological facts entirely. Instead, the group will accept members based solely on the box they check on the membership application.

“After weeks of significant conversations at all levels of our organization, we realized that referring to birth certificates as the reference point is no longer sufficient,” Boy Scouts chief executive Michael Surbaugh said in a statement obtained by The New York Times.

The decision by the Boy Scouts comes at a time when taxpayer-funded school districts as well as state and local governments around the United States are passing laws both allowing and prohibiting boys who dresses like girls — and girls who dress like boys — to waltz into the public bathrooms, locker rooms and showers of their choosing.

People who insist that it’s possible to just up and change genders have praised Monday’s announcement by the Boy Scouts.

“From our perspective, they clearly did the right thing,” said Zach Wahls, co-founder of Scouts for Equality, told the Times. “My team and I knew that they were considering a policy change, but we are both heartened and surprised by how quickly they moved to change the situation.”

Wahls founded Scouts for Equality in 2012. At that time, he notes, the Boy Scouts of America prohibited gay scouts and gay scout leaders. Transgender issues were not even on the organization’s radar back then.

Monday’s announcement is an abrupt about-face from the stance the Boy Scouts took just a few months ago when a Scout group in New Jersey asked an 8-year-old girl to leave the all-boy group because she is not, in fact, a boy.

“My identity is a boy,” the girl, Joe Maldonado, said, according to the Times. “If I was them, I would let every person in the world go in. It’s right to do.”

Rex W. Tillerson, the former Exxon CEO and President Donald Trump’s nominee for secretary of state, played a pivotal role in changing the Boys Scouts’ policies excluding gay members and leaders when held a leadership role in the organization from 2010 to 2013.

For well over a century then — until Monday — the Boy Scouts — and Cub Scouts — had been an organization exclusively for boys.