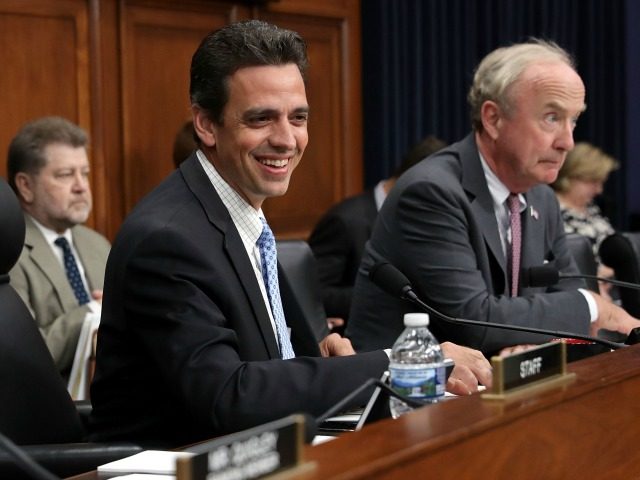 The Republican-led House Appropriations Committee voted their budget out of the committee thanks to several republicans including Judas Iscariot and Benedict Arnold.  This bill would allow illegal aliens to steal jobs from American citizens and drive Americans and the middle class deeper into a hole.  If Hillary would win in 2020 no American would ever get another government job.

The bill would still have to pass the House and the Senate where traitors are as common as fleas on a hound.  Of course, Trump could veto and there would never be enough votes to override it.  Two things need to happen.  Republicaqns need to grow cojones and amend that part of the bill into oblivion.  And more importantly, President Trump needs to kill the DACA program.

The business-focused “moderate” Republicans who submitted to the ideological Democrats’ pressure “are cowards,” said one pro-American lobbyist.

“Last night’s action by the Republican-led House Appropriations Committee making illegal aliens eligible for federal jobs is yet another example of why President Trump must honor his campaign pledge and repeal President [Barack] Obama’s unconstitutional Deferred Action for Childhood Arrivals (DACA) program,” said a statement from the pro-American Federation for American Immigration Reform. It continued:

The Appropriations Committee, without notice in the middle of the night, approved a provision changing an Obama-era rule barring DACA beneficiaries from working directly for the federal government. In an effort to provide Republican members cover for this cowardly act, Chairman Rodney Frelinghuysen (R-N.J.) took the unusual step of denying a roll call vote.

The congressional Republican leadership, many of whom are on record calling DACA unconstitutional, has once again demonstrated its cynical disregard for American workers, transparent government, and principle.

This betrayal of American workers must be rectified when the Appropriations bill reaches the floor of the House by stripping this provision from the bill and forcing all members of Congress to register their positions in a roll call vote. If they are not willing to do so, President Trump should immediately to rescind DACA.

This is a product of an open and inclusive process. My subcommittee communicated extensively with members about their requests and worked around the clock to put together a very conservative bill that aligns closely with President Trump’s budget. I’m particularly excited about the financial reforms, which slash harmful regulations, streamline outdated agency processes, and rein in the rogue Consumer Financial Protection Bureau. These reforms will help spur job creation and economic growth, and blaze a clearer path for families and businesses to achieve their dreams. This bill also advances many other conservative priorities by cutting spending, zeroing out programs and maintaining pro-life policies. Overall, this bill takes a significant amount of power away from government and gives it back to Georgians and all Americans.”

It gives the power to illegal aliens and liberals who want their votes.

Tags: government jobs out of committee to illegals traitors