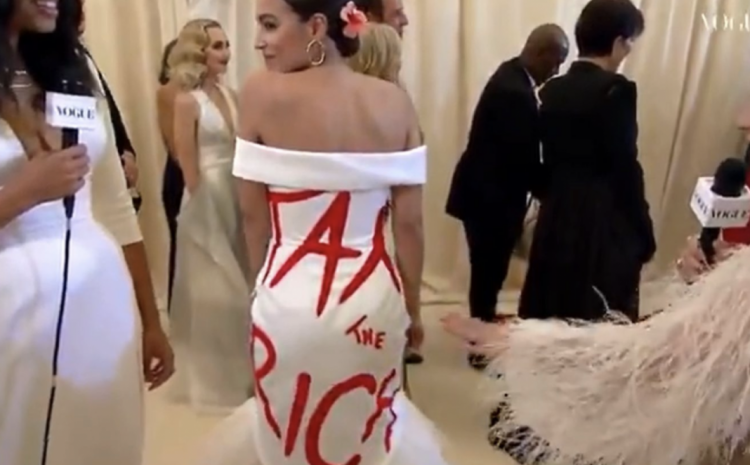 It has been a while since we have brought everyone an AOC story and it seems to have been worth the wait.

Socialist darling, Alexandria Ocasio-Cortez cannot help but make political statements wherever she goes and last night at the MET Gala was no exception.

Um, did she not realize where she was going?

Why in the world would AOC show up to this particular event in this sort of gown that is making this type of statement?

Of course, I and many others think it is just a desperate cry for attention and took to Twitter to mock the tone-deaf politician.

The New York Post has more on AOC’s latest cry for attention:

Congresswoman Alexandria Ocasio-Cortez — who is the face of the Democratic Socialists of America — showed up to the glitzy Met Gala wearing a political message seemingly aimed at her fellow partygoers.

Ocasio-Cortez wore a white gown by Brother Vellies with “Tax the Rich” in red letters splashed across her back and accessorized with a matching slogan on her bag to the America-themed ball.

The 31-year-old rep, who is the darling of the far left, could have found a more receptive audience to her sartorial statement at a workers rally. The Met Gala is an exclusive event, which is a parade of millionaire pop stars, wealthy actors, trust fund society swans and members of the gliteratti.

Alexandria Ocasio-Cortez attending the $35,000-a-ticket #MetGala in a Brother Vellies gown blaring "Tax the Rich" is a complicated proposition. pic.twitter.com/prxOojWxwx

.@AOC is wearing a Tax The Rich dress at a $33,000/person event, exclusively attended by Hollywood elites.

She understands irony almost as well as she does economics. #MetGala

I'm starting to think AOC is a parody congresswoman.

There's simply no way she thought wearing a designer "Tax The Rich" dress to an event with $30,000 tickets would be received well.

“Individual tickets are reportedly priced at $30,000 a piece, a far cry from when [Vogue editor-in-chief Anna] Wintour first took over the running of the event in 1995 when they were just $1,000,” Newsweek reported. “Then there are the tables, typically bought by brands and fashion houses. These reportedly start at $275,000.”

AOC was widely mocked and criticized online, including by her supporters, for the stunt, including:

Ej Dickson, senior writer at Rolling Stone, tweeted: “Am I the only one who thinks this is really f***ing stupid[?] 1) The dress is ugly, 2) She’s at a $35k per person event and this isn’t nearly the own she thinks it is. 3) The dress is ugly. I mean I love her but come on this is so dumb. Peak girl boss s**t.”

Glenn Greenwald, a progressive blogger, tweeted: “Lots of people commenting snidely on the lack of masks and social distancing in this opulent indoor event in the middle of a pandemic but — as was true of Obama’s indoor bash — COVID wasn’t invited to the #MetGala and these are the sophisticated people who aren’t in danger.”

Rep. Dan Crenshaw (R-TX) tweeted: “I’m not even mad at the lack of self awareness or hypocrisy anymore. At this point it’s just hilarious. These people are a giant joke.”

Donald Trump Jr. tweeted: “What makes @AOC a bigger fraud: The “tax the rich” dress while she’s hanging out with a bunch of wealthy leftwing elites or the lack of masks after spending the past 18 months as one of the biggest authoritarian mask Karens in the country?”

Ladies and gentlemen, this is what privilege looks like:

But AOC doesn’t mean them; she means you. You’re rich. Because you work. Tax you. That’s the reality. The Met Gala guys get tax breaks. You don’t. pic.twitter.com/awGxEdT2xB

How does this work FEC-wise?

Is this an illegal contribution

How does this work FEC-wise?

Is this an illegal contribution

We already tax the rich. pic.twitter.com/3yXoKCkBXt

Why didn’t AOC help her abuela instead of spending 30K+ to go to the Met Gala?

Another epic fail by AOC and I am so glad we were able to see it and mock it together.