Otera Bibi, 42, was stripped and shaved before being lynched by the furious villagers in India after false rumors she was accused of being a child kidnapper. 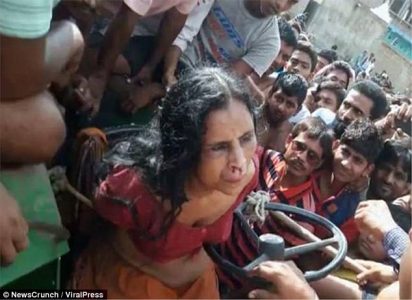 She had been living with her parents but wandered into a village in West Bengal, India, where she was tied to a tractor and beaten to death.

The mob pounced on Otera inside the wooden hut amid fears she was attempting to snatch his ten-year-old daughter. 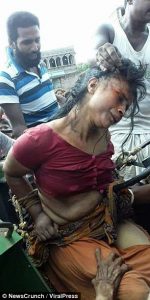 Villagers ripped off her clothes and shaved her head during a brutal three-hour assault during which she was pelted with stones.

Witnesses told as Otera was beaten “mercilessly” for three hours in the Mithipur-Panagarh village.

Otera is understood to have tried to protest her innocence but onlookers could not understand what she was saying.

Police arrived later in the afternoon and rushed Otera to Jangipur sub-divisional hospital but she died of her injuries after the attack in the Murshidabad district.

Police detained several villagers for questioning but so far nobody has been charged over the death.

Murshidabad Superintendent of Police Mukesh said: “A mob beat up the woman after a rumour spread that she was trying to lift children from the village.

“We have started investigating the murder case. We are trying to identify the people involved in the lynching as well as those who spread the rumour.”

They believed Otera was a child kidnapper after a similar incident last month in which a child vanished from the neighbourhood.

But Otera’s husband said his wife was “mentally challenged” and had been undergoing psychiatric treatment for more than a year. Her family said they were not concerned at first when she went missing because she would often wander away from home for a day or two.

Police have dismissed the villagers’ claims that Otera was a child abductor.

“We will not spare the people who spread these rumours. We will also take action against the villagers who lynched Otera Bibi if her family lodges a complaint.”