A mom lost her family within a blink in a car accident in 1997. However, she received the shock of her life when her young son defied medical odds and came back to life.

In October of 1997, a family’s life would be changed forever. A tragic stroke of fate tore them apart but through a miracle, a mother and son got to see a glimpse of heaven.

On their way home, Julie Kemp and her family were driving through the Mint-Hill Intersection when their car was T-boned by an ambulance. Julie’s husband’s seat flew backward, crushing the boy behind him. Eight-year-old Landon lost his life at that time.

Or at least, he was pronounced dead for a moment. First responders to the scene managed to revive Landon.

Unfortunately, on the way to the Carolinas Medical Center, Landon began losing grip once more. He slipped to the other side yet again while they were speeding through traffic.

It wasn’t the end for Landon, however.

Doctors and medical staff were successful in bringing the boy back. But losing his life several times on one occasion proved dangerous.

As Kemp explained in a video below even if Landon lived through the accident, his chances of living like a normal boy are slim. 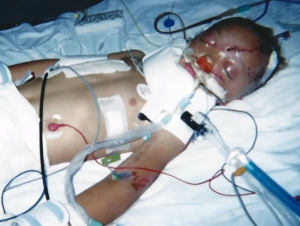 Doctors at Carolinas Medical Center in North Carolina told Julie he would likely not survive, but after two weeks in a coma, Landon miraculously woke up. Everyone was shocked to discover he had no trace of brain damage.

Instead, Landon had the most incredible story to tell about his experience in the afterlife.

Julie dreaded having to tell her son that his father had passed away, but couldn’t believe it when Landon told her, “I saw him in heaven.”

Landon also claims he saw his dad’s friend, who’d passed away less than a month before he did, also in a car accident, as well as the friend’s son who had also died. “Never one of us said a word to each other, but we were just all standing there,” Landon recounted.

But the most incredible part of Landon’s story is when he looked over at his mom and said, “By the way, I forgot to tell you. I saw your other two kids.”

At first, Julie had no idea what her son was talking about. Then she realized what he meant…

Watch the video below to hear Landon’s fascinating story of the afterlife, and please SHARE his miracle recovery with your friends.